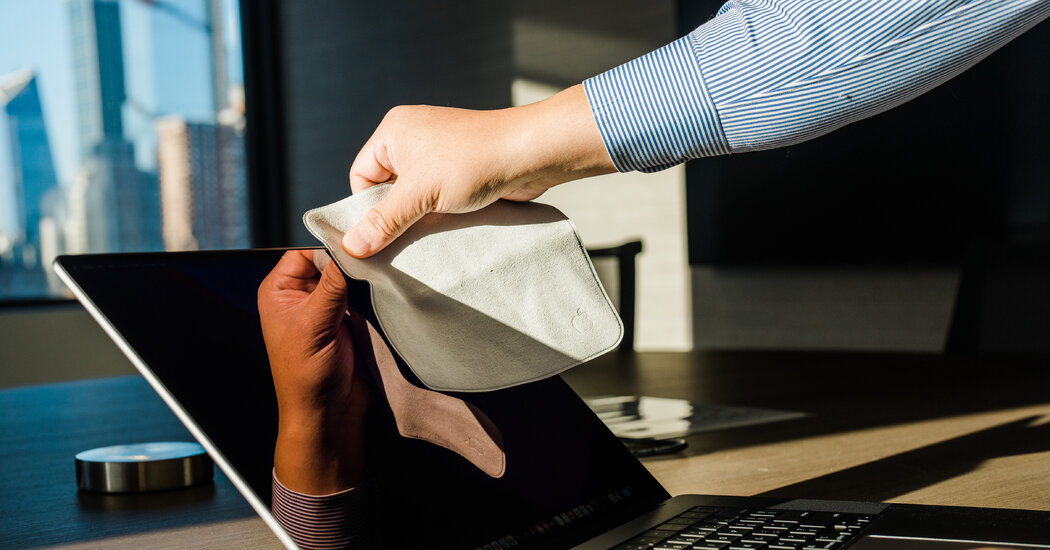 But a different and unheralded Apple release is garnering so much interest that it has become the company’s most back-ordered new product: a $19, 6.3-by-6.3-inch cloth to wipe smudges and fingerprints off screens.

The cloth, imprinted with the Apple logo in the corner, is made with “soft, nonabrasive material” to clean the screens of iPhones, iPads and MacBooks “safely and effectively,” according to the product page. The listing adds that the Polishing Cloth — capital P, capital C — is “compatible” with 88 different Apple products. For most U.S. shoppers, shipment is delayed until Jan. 11, at the earliest.

Charging $19 for a piece of cloth about the size of two stacked dollar bills is bold even by Apple’s standards, a company whose legions of loyal customers are conditioned to stomach steep prices. An Apple-branded set of four wheels to “improve mobility” for the Mac Pro, the company’s most expensive desktop computer, is priced at $699, for instance.

But the Polishing Cloth stands out because it is far more expensive than widely available alternatives. MagicFiber, a popular brand of microfiber cloth that uses ultrafine fibers to clean glass without scratching the surface, offers a pack of six for $9 on Amazon.

“You have to give them credit for the chutzpah to charge $19,” Walter Gonzalez, president and founder of Goja, the parent company of MagicFiber, said of Apple.

Even so, the price has not stopped Apple fans from rushing to be early adopters.

Albert Lee, 47, a director at a consulting firm in New York, said he bought the cloth at an Apple Store on Tuesday. He was picking up a new MacBook Pro, a high-end laptop computer, when the Polishing Cloth caught his eye. He bought four and then posted a picture of his bounty on Twitter.

On Twitter, the cloth has been fodder for jokes and even a parody account since Apple quietly put it on sale on Oct. 18. Later that week, when Tim Cook, Apple’s chief executive, posted a tweet promoting a new retail store in Turkey, Elon Musk, Tesla’s chief executive, needled him by replying, “Come see the Apple Cloth” with a trademark logo.

(Mr. Musk’s company is also not shy about testing the strength of its brand and the fealty of its customers. Tesla’s website offers a company-branded “handblown” decanter for $150 and a $60 umbrella with an “ergonomically designed handle.”)

Technically, the cloth is not a new product. Apple had previously provided it free for customers who bought one of its high-end monitors, Pro Display XDR. The $5,999 display has a special type of glass that reduces glare, but may scratch if wiped with a conventional cloth. Apple said it designed its own cloth for that special glass and decided to sell the product separately when some customers asked to buy extras.

An Apple official said in an interview, based on the condition that The New York Times not quote or identify her, that the company was not surprised by the demand for the Polishing Cloth. The official said the cloth was very effective and had been designed to be special, including a custom light gray color. Apple said the cloth was made of a nonwoven microfiber but declined to elaborate.

Federico Viticci, editor in chief of MacStories, a website dedicated to Apple news and apps, said he initially thought the Polishing Cloth was a joke.

“I’ve been cleaning my iPhone screen and my iPad screen with the cloth that comes with my eyeglasses or my T-shirt, or a paper towel like normal people,” he said.

But Mr. Viticci, who is based in Italy, said he ended up buying the Polishing Cloth because “I kind of realized the meme potential here.” His tweets about the product have since gotten hundreds or thousands of likes and retweets, with subscribers to his site asking for exclusive cloth photos.

Patrick Tomasso, 32, a Toronto-based YouTube creator of tech and photography-related videos, said he also thought that Apple charging $25 Canadian dollars for the cloth was “ridiculous” since many tech products include a microfiber cloth free.

But when he noticed that it was not shipping until next year, he said he got a “bit of FOMO” — fear of missing out — and quickly snapped up two sheets from a nearby Apple store. As a spoof, Mr. Tomasso then made an “unboxing video” of himself opening the “most revolutionary Apple product.”

In the video, he noticed that the Polishing Cloth’s color looked different in person — more gray, less white — and that there was a big crease in the middle that might need to be ironed.

His assessment? It’s a nice cloth worth maybe $5.

Allies of President Trump are spreading another baseless rumor about computer-based vote manipulation, days after they gained attention for falsely claiming that a widely used piece of election administration software had been used to delete […]

Founder of CrowdTangle Hopes to Bring Transparency to Social Media

Senator Portman said in an emailed statement that “every new disclosure of problematic activities by social media companies reignites calls for congressional action.” Before answering those calls, he said, “Congress should take a step back […]

IBM has tried multiple ways to stay relevant in the technology world. But it has often been outgunned by rivals like Amazon and Microsoft. On Tuesday, IBM outlined its latest strategy: using its $34 billion […]