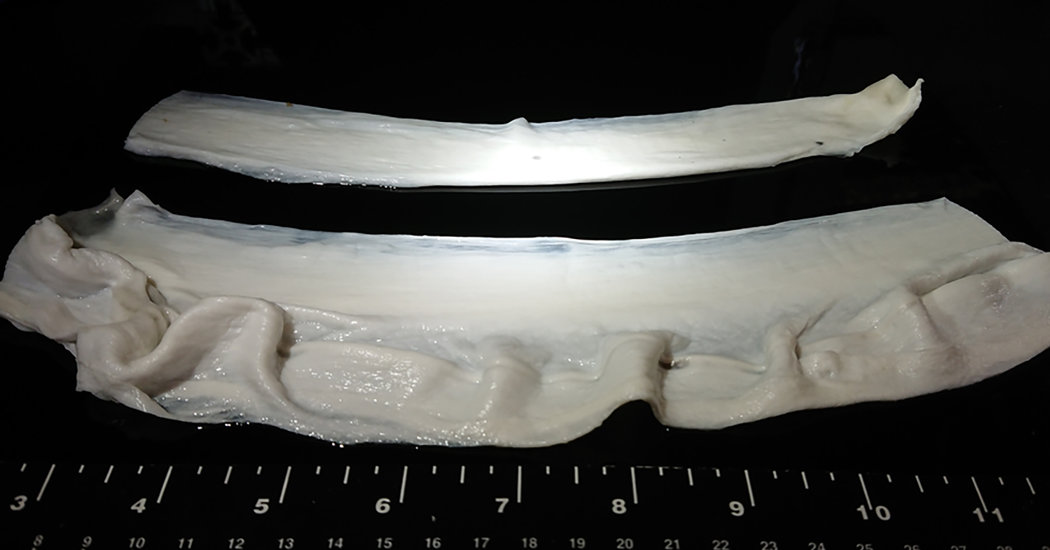 The alt-meat industry has created quite a sizzle, promising delicious burgers, steaks and even sushi that is grown from animal cells in the lab.

But most cellular agriculture still looks like mush. The manufacturing process — which starts with animal muscle and fat grown from stem cells in petri dishes — is fine for making burgers, but it fails to provide the kind of texture needed for more substantial cuts of meat, like steaks.

On Monday, scientists at Harvard University reported that they had found a way to more closely mimic the form and flavor of real meat, by growing the muscle cells of cows and rabbits on a gelatin scaffold. Their research was published in the journal Science of Food.

“We showed that it can be done,” said Luke MacQueen, the Harvard researcher who led the study. “Now we’ll keep improving our methods, tweaking the type of scaffold fiber to try even more complex textures, tastes and nutritional profiles.”

Refining this technique and others like it could help more people, including serious carnivores, consider lab-grown meat as a sustainable, ethical alternative to meat raised for slaughter, Dr. MacQueen said.

In the body, groups of cells get physical support from an extracellular matrix, which is made up of water, collagen proteins and various nutrients. The extracellular matrix also provides essential cues for growth, cell orientation and differentiation.

“Muscle cells need a structure to grow on, the same way the walls of a building need a steel frame or a house needs a wooden skeleton,” said Kevin Kit Parker, a bioengineer at Harvard and also a co-author of the study.

To mimic this cellular environment, Dr. Parker and his colleagues decided to make scaffolds out of different concentrations of gelatin, a protein product derived from collagen. When collagen-rich meat cuts, such as beef chuck, are cooked, the heat naturally melts collagen fibers into softer gelatin, giving meat its succulent texture, Dr. Parker said.

Rabbit and cow cells latched onto the gelatin scaffold, growing until they formed about a square inch of muscle.

To test whether the final product resembled the texture and behavior of meat that chefs and home cooks use every day, the researchers performed a variety of food industry analyses: simulating cooking by heating the lab-grown meat on a hot plate, compressing it as if with a meat mallet and measuring the force needed to cut each piece of meat. They found that their lab-grown meat fell in between the springiness of a hamburger and a beef tenderloin.

The Harvard scientists are not the only ones testing scaffolds for cell-based meat.

Some researchers have been inspired by the field of regenerative medicine, where scaffolds are used to help grow tissue that may one day be used for repairing organs or replacing grafts. They have transformed spinach leaves into scaffolds by removing all the plant’s cells and using the empty cell walls as a frame for growing animal tissue. Other groups have modified apples, artichokes and the threadlike roots of mushrooms.

“Different cells have different needs,” said Justin Kolbeck, co-founder and C.E.O. of Wild Type, a start-up making cultured salmon. “Fish flakes differently because its underlying architecture is quite different from other types of meat. Our cells also grow at different temperatures from mammalian systems, so the scaffolds we develop need to be really optimized for fish cells in all of these regards.”

Before cultured meat or fish becomes a dinnertime staple, companies also must overcome challenges of scale, said Gregory Ziegler, a food science professor at Pennsylvania State University. They need to optimize the media that cells grow in and arrange large bioreactor facilities to culture enormous volumes of cells at a pace that matches customer demand. It took Wild Type three and a half weeks to create a pound of salmon for a tasting event at Portland, Oregon’s Olympia Oyster Bar in June.

Companies also have to win regulatory approval to serve or sell cultured meat for the masses. But as alt-meat becomes available and affordable, consumers may find it easier to get overcome their squeamishness about lab-grown food, if it actually looks, tastes and feels like the real deal.

The European Space Agency is continuing the search for new Earths this week with the launch of Cheops, a new telescope whose name stands for CHaracterising ExOPlanet Satellite. The spacecraft launched on a Soyuz-Fregat rocket […]

In 1963, Myriam P. Sarachik tackled a big question in her field. For decades, physicists had noticed certain metallic materials exhibited odd behavior in electrical resistance — the amount of sluggishness to the flow of […]

A.I. Predicts the Shapes of Molecules to Come

For some years now John McGeehan, a biologist and the director of the Center for Enzyme Innovation in Portsmouth, England, has been searching for a molecule that could break down the 150 million tons of […]