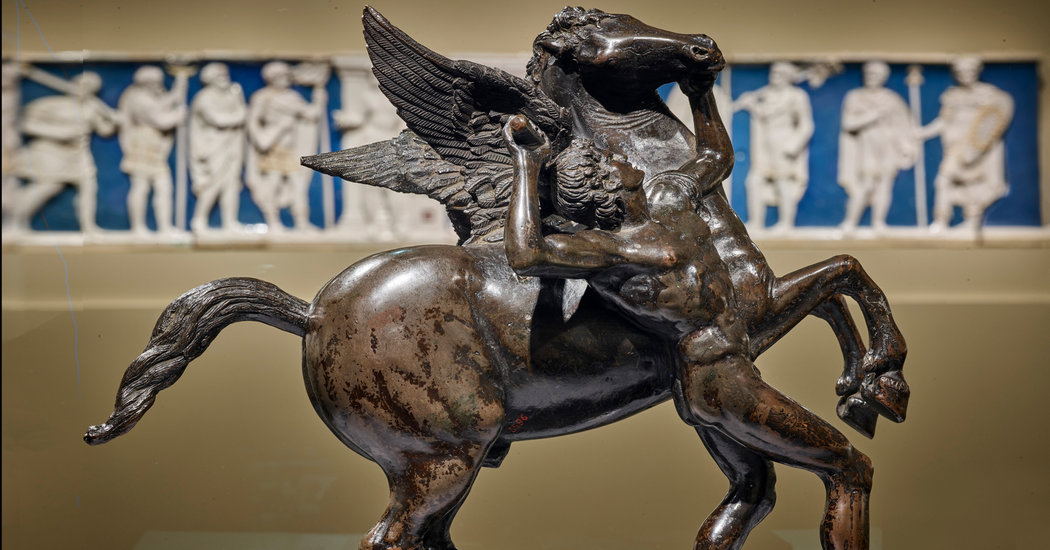 In 1846, back when critics were not yet afraid of rendering judgments, Charles Baudelaire went to the Paris Salon and wrote a review that aimed to put an entire art form out of business.

Under the title “Why Sculpture Is Boring,” Baudelaire argued that bronze and marble statuary was vague and elusive, and “presents too many faces at once” — 100 different angles — to the spectator. He thought sculpture lacked the authority of painting or architecture, which both made clear where they stand. When “a chance illumination, an effect of lamplight, reveals a beauty which was not the one he had thought of,” the sculptor must sadly accept that three-dimensional art is always fated to depend on the circumstances of its display. That makes it, the poet insisted, nothing but “a complementary art.”

Baudelaire’s critique was just one of many anti-sculpture broadsides over the last two centuries, mostly delivered by painters — and by those critics in the tank for them. (Ad Reinhardt, maybe apocryphally, said in the 1950s that sculpture was “something you bump into when you back up to look at the painting.”) But something interesting has changed in the camera phone age: Suddenly, a sculpture’s infinite perspectives and mutable viewing conditions provide new prospects in the gallery and on the web. To Baudelaire, sculpture disappointed by refusing to resolve into a single point of view, but to the camera phone-conditioned eye, that refusal is an opportunity. Every sculpture, to the contemporary viewer, is first a solid thing in the gallery and then a font of subsequent images, co-authored by artist and viewer.

I’ve spent a lot of the past season thinking about the contemporary relevance of sculpture, and how we experience solidity, weight and dimension in the era of the cloud. It’s a question that framed my viewing of Verrocchio’s works in bronze and terra cotta, on view through Jan. 12 at the National Gallery of Art in Washington. It exercises contemporary sculptors as different as Richard Serra, Rachel Harrison, Nairy Baghramian and Andra Ursuta, who all presented major new shows recently in New York. It looms over the rolling controversies over public monuments, which solidify history in metal or stone, then deliquesce into pixels on Google Street View. And it provides the unexpected link between two extraordinary sculptors, working five centuries apart, who each updated the classical sculpture tradition for new audiences looking with new eyes.

The older of these two artists is Bertoldo di Giovanni (circa 1440-1491), whose small but varied output in bronze, wood and terra cotta anchored the fall season at the Frick Collection. Bertoldo enjoyed the patronage of Lorenzo the Magnificent, the biggest hot shot of 15th-century Florence, and yet he produced relatively little; today he is most often spoken about as the student of Donatello and teacher of Michelangelo. This first-ever retrospective, which closes Jan. 12 and contains almost every surviving work, sticks up for Bertoldo as a multimedia resuscitator of the art of classical Rome, whether in Lorenzo-celebrating portrait medals or in an entire terra cotta frieze that topped the entrance of a Medici country house (a striking loan from a Tuscan museum).

Nude men and gods, twisting and writhing, were Bertoldo’s predicament and prize. An arresting, full-scale statue of St. Jerome, made of painted wood and credited here to Donatello and Bertoldo working together, embodies the hermit priest as a lithe but wretched penitent, face pained and abdomen collapsed as he strikes his chest with a rock. Yet to a 21st-century eye, the most challenging and surprising work here is a serpentine bronze statuette of Orpheus, done around 1471 and on loan from the Bargello in Florence.

Just 17 inches tall, with a tiny waist and unmuscled thighs and buttocks, this Orpheus looks more like a boy than a man as he sings, dances and plays a Renaissance string instrument called a lira da braccio. Get up close and you’ll see that the bronze is abraded and unfinished, especially on Orpheus’s lyre and on the animal pelt draped over his chest — the result of an only partial mastery of the lost-wax process of metal casting, which involves forming a clay mold around a wax figure, heating it so the wax melts away, and then filling the cavity with liquid metal. It was an ancient technique that Florentine artists had only recently rediscovered. Bertoldo’s “Orpheus,” for all its antique inspiration, is a work of a new, or newly revived, engineering process, whose glitchy rusticity has both a human and a technological derivation.

Bronze statuette works grew in refinement and finish later in the Renaissance and into the Baroque era. The financier and art collector J. Tomilson Hill, whose collection of bronzes went on view at the Frick in 2014, now exhibits his cache of statuettes in an airy, white-walled space in Chelsea — alongside works of contemporary art. Right now at the Hill Art Foundation you can see five Renaissance bronzes alongside the sculpture of Charles Ray, the deep-thinking and slow-working Los Angeles sculptor who has rethought the classical tradition for our age as profoundly as Bertoldo did for his.

For Mr. Ray, sculptural invention takes the form of an excessive perfectionism, in which new scanning and casting technologies permit thrillingly off-key riffs on ancient forebears. In the low-slung sterling silver sculpture “Mountain Lion Attacking a Dog” (2018), for example, the artist embodies a predator sinking its teeth into the flesh of its upturned prey, updating the Greek and Roman taste for group sculptures of animals to today’s Hollywood Hills. (This work’s most evident art historical precedent is the marble sculpture “Lion Attacking a Horse,” at the Capitoline Museum in Rome — a favorite of Bertoldo’s disciple Michelangelo.)

The lion’s painstakingly chased fur recalls the contrasts of clean and striated bronze in Bertoldo’s “Orpheus,” though now the technology at hand is different. For Bertoldo, the intermediate step between the initial figure and the metal cast was a layer of wax. For Mr. Ray, it is 3-D scanning and CNC machining: highly precise technologies that translate objects into data that can be output to a robotic mill.

For both the metal sculpture stands as an uncanny replica or transformation of bodies we know, given new integrity and new value (literally, in the case of silver and bronze casts). What makes these sculptures compelling — and what Baudelaire hated about them — is the cryptic and unfathomable faces they offer as we circle them in the gallery, beholding them from all sides, scrutinizing their chasing and their patinas.

What interests me now is how young audiences may perceive these sculptures, and how the social photo has transformed our appreciation of them. For more and more viewers, the phone screen conditions almost all visual perception — and this is true even at a museum like the Frick, where, nearly alone among New York museums, you cannot take photographs. Whether the smartphone comes out or stays in your pocket, our eyes are already being reformatted to follow the logic of digital images, where life becomes pictures and pictures become information.

Sculpture, much more than maybe any art form, can offer viewers the satisfaction of oscillating between reality and virtuality, between object and image. (Unlike installation art, which too often recedes into a selfie backdrop, a sculpture retains its potency as it’s channeled with light and shadow from gallery into the social media feed.) Baudelaire’s anxiety about sculpture as a “complementary art” has drained away. The new challenge, when we look at Renaissance or modern sculpture, is to somehow still appreciate mass, volume and scale when all that is solid melts into the screen.

Bertoldo di Giovanni: The Renaissance of Sculpture in Medici Florence

Charles Ray and the Hill Collection

In the past six months, auctioneers have sold a computer-generated illustration by Mike Winkelmann, the digital artist known as Beeple; digital Hot Wheels art made by Mattel; and even a New York Times column. But […]

Ingo Maurer, Designer Known as a Poet of Light, Dies at 87

Ingo Maurer, a German lighting designer who was Promethean in his delivery of illumination — fashioning lamps out of shattered crockery, scribbled memos, holograms, tea strainers and incandescent bulbs with feathered wings — died on […]

Peering Under Vermeers Without Peeling Off the Paint

WASHINGTON — Here is a question that art experts at the National Gallery of Art are trying to tackle: Are a couple of paintings in the museum’s collection that are credited to Johannes Vermeer actually […]