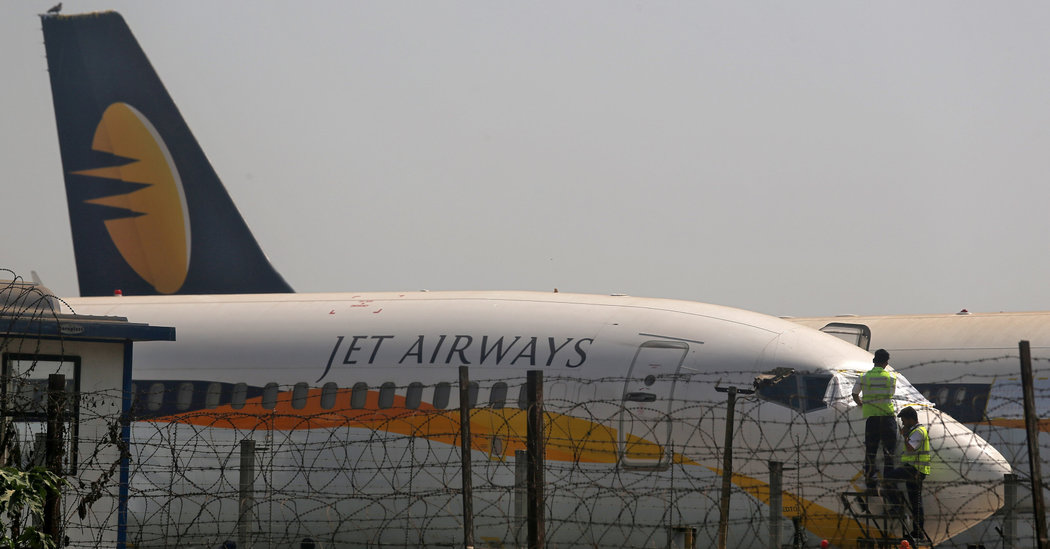 MUMBAI, India — Jet Airways, which revolutionized Indian aviation after the government ended the monopoly of state-owned carriers, is now on the brink of shutting down, devastated by management missteps and the feisty low-cost airlines that followed in its footsteps.

Out of cash and desperate for a buyer, Jet is now operating just nine planes, according to the Press Trust of India, down from 123 at its peak. The company had grounded dozens of aircraft over the past few weeks as its finances deteriorated, and on Friday, it canceled its last remaining international flights through at least Monday, upsetting the plans of travelers in locations from London to Hong Kong.

“The airline’s management and its key stakeholders, including its consortium of lenders, continue to work closely towards resolving the current situation,” the company said in a statement. “Jet Airways regrets the inconvenience caused to its guests.”

The outlook is grim.

“I do not see that there is any way to revive it in this form,” said Harsh Vardhan, chairman of Starair Consulting and a former chief executive of Vayudoot, a regional state-owned Indian airline that folded two decades ago. “It has to die its own death before they may be able to get a strategic buyer.”

The company’s 1,000-plus domestic pilots, who have not been paid for three months, have threatened to stop working on Monday unless they receive their back wages. There is no money to pay them.

Naresh Goyal, a former travel agent, founded Jet 26 years ago and built it into India’s largest carrier by offering travelers a modern, efficient alternative to the poor service and unreliable schedules of India’s government-owned carriers. But as a new crop of discount airlines emerged, Mr. Goyal failed to adapt and instead borrowed heavily in an attempt to maintain Jet as a high-end carrier.

Mr. Goyal was forced out last month, and Jet is now controlled by its lenders, which are collectively owed about $1 billion. Led by the government-owned State Bank of India, they are now trying to sell 75 percent of the company by the end of the month. Jet’s major competitors have expressed little interest, and the banks have refused to provide a promised $217 million in interim funding.

Aviation authorities have been giving away Jet’s prime airport gates and flight slots to other airlines to increase capacity and ease fares that have shot up with the elimination of so many seats. And the companies that own Jet’s airplanes have been repossessing them after the company defaulted on lease payments.

Passengers have also been burned as Jet has canceled flights on short notice. On Wednesday, a flight from Amsterdam to Mumbai was canceled just before boarding after Jet’s local cargo handler seized the Boeing 777 for nonpayment of debts.

The airline’s best hope might be a bid from Etihad Airways, a carrier based in Abu Dhabi that already owns 24 percent of Jet. Etihad is wrestling with its own financial problems, but it does have deep pockets: It is owned by the oil-rich Abu Dhabi government. Jet’s other major airline partners — Delta Air Lines, Air France and KLM — have so far shown no inclination to join the fray.

Any buyer will find it difficult to make money. Indian fliers are very price conscious, and efficient low-cost carriers like IndiGo and SpiceJet will make it difficult for Jet to charge a premium for its full-service offerings.

Moreover, the trust that the company built up over decades has vanished, said Ajay Awtaney, a once-loyal Jet customer and the founder of Live From a Lounge, an Indian business travel website.

“Even if someone manages to refuel the airline with money, it’s a long haul ahead,” he said. “It’s not like passengers are going to queue up and say now things are hunky-dory.”

What Kind of Plane Am I Flying On?

After engine debris from a Boeing 777-200 rained down on a Denver suburb, some fliers may want to know more about plane safety and maintenance. Here are some answers. Source

The visit sent a clear message that India’s powerful ruling party is becoming increasingly upset with the company. Source

Newer Planes Are Providing Airlines a Trove of Useful Data

This article is part of our new series, Currents, which examines how rapid advances in technology are transforming our lives. With few flights and even fewer passengers, the coronavirus pandemic unleashed a wave of challenges […]