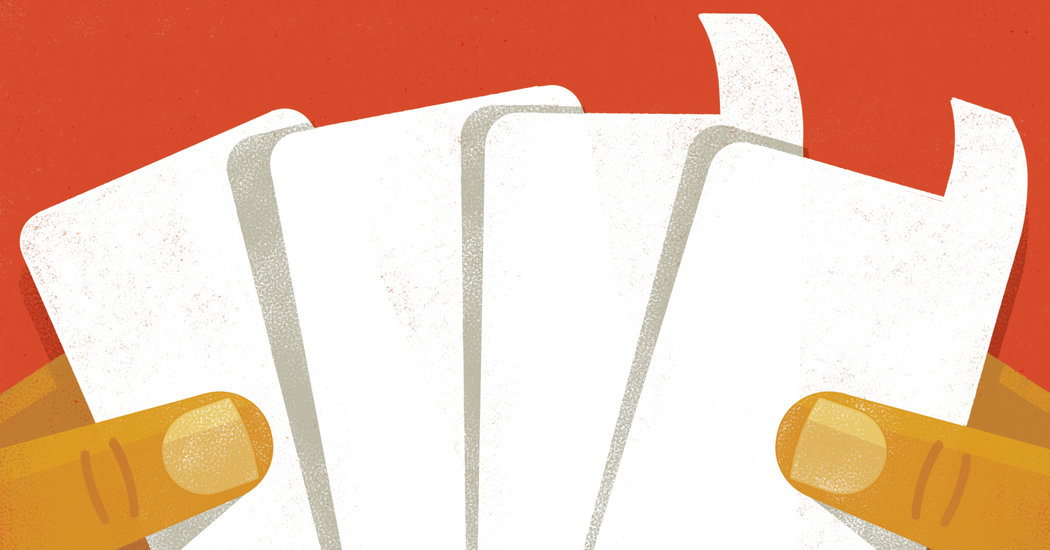 Name a trait you share with your mother? The oddest item you’ve gotten for free? Did you like prom?

You could pay for a deck or app filled with these questions, and myriad variations on them — schoolyard anecdotes and bucket lists, cherished Halloween costumes and your least favorite smells — all designed to save you from stale conversations. Conversation starter games promise to salvage your holidays, meetings and dates from chatter about the weather.

They can also help you say goodbye to your routine office icebreaker. Representative Alexandria Ocasio-Cortez posted on Instagram earlier this year that her weekly staff meetings start with a deck of conversation-starter cards.

“I usually say too much,” Ms. Ocasio-Cortez wrote in an Instagram story in May, above a photo of a card with the prompt: “Tell me about a time when your life felt abundant.” The game helps her team understand each other, she wrote, and bond “on a more meaningful, human level for a few minutes a week.”

Many of these games are sweepingly broad in their focus. TableTopics, one of the earliest conversation starter decks, asks questions like, “Have you ever been escorted out by security?” and “What topic do you know more about than anyone else in the room?” The game has sold 3.5 million copies.

Jennifer Aniston brought a deck on “Ellen” in 2011. “If someone’s really boring,” she said, “you can just open this up.” Over the years, the company has branched into more specifically tailored games — a recent “Inspiring Women” collection features quotes by Anne Frank and Malala Yousafzai on the back of questions.

The musician Eric Hutchinson created Songversations, a game of record-shaped cards with music-related prompts (a song that played at a school dance, the music that would play on a never-ending loop in your personal hell).

The Hygge Game plays on the Danish concept of coziness and comfort, offering 300 questions for “pleasant company,” according to their tag line.

On the surface, they’re an attempt to pull people from their phones. But conversation starter games also address a deeper issue: When you’ve run out of things to talk about, what are you supposed to say?

The night Rebecca Duger’s husband died, his surgeon sat with her. She was in a hospital in Pittsburgh, Pa. seven hours away from her home in Syracuse, N.Y.

The doctors and nurses who had talked with her while her husband faded in and out of consciousness over the past year had become a kind of comfort. They invited her to their homes for Thanksgiving and Christmas. They gave her rides at night, so she didn’t have to walk in the dark alone. “You still have family,” the surgeon said to her that night. “We’re here for you.”

Ms. Duger wanted to maintain those friendships. She just wasn’t sure what to say. So the next few times she saw the people who had kept her company in the hospital, she brought along Our Moments, a conversation-starter card game her yoga teacher mentioned using at dinner parties.

The game, which bills itself on its website as a “thought-provoking” engine for “great relationships,” is comprised of cards asking questions about dream vacations and childhood regrets, the eras you would visit in a time machine and the words you would select to describe yourself.

Jason Li, who studies game design at The New School, compares the rise of these games to the recent popularity of astrology app Costar. Instead of checking your horoscope every day, he said, you could pick up a conversation starter. Both practices prompt you to think a bit more deeply about yourself, to seek some richer understanding.

“We’re trending more toward this emotional knowledge of each other, versus something that’s purely rational or scientific,” Mr. Li said. Conversation starter games “force you as a player to verbalize ideas you hold subconsciously,” he said. “You’re like, ‘Oh, do I actually think this?’ It’s a role play of the self.”

Marientina Gotsis, an associate professor at the University of Southern California, founded and leads the school’s Games for Health Initiative and teaches courses based on game design. She has seen her students develop more and more icebreaker games in recent years.

“They’re more popular right now because students are more attuned to social impact — they have a willingness to discuss things that perhaps previously were taboo or stigmatizing,” Ms. Gotsis said. She credits social media with encouraging people to share candidly: they find community and receive criticism more often than when they post something personal online. The games provide a formalized structure for what some might consider oversharing.

In 2015, Alon Saggie moved from Israel to Silicon Valley, along with his wife and their three children. Their youngest was only three months old, and they scrambled to adjust to their new lives while juggling work and child care. The stress was intense, Mr. Saggie said, and impacted their relationship. In the rare moments he and his wife were alone, they began to ask each other “deep” questions, to maximize their time together.

He started printing some of these questions on cards in his spare time, assembling about 300 decks at first of the game that would become Our Moments. They sold quickly, so he printed more. To date, Our Moments has sold tens of thousands of copies. The game has become his full-time job.

Mr. Saggie has theories about the game’s appeal, but isn’t sure why it has sold as well as it has. “If I knew what I did right, I’d just repeat it,” he said.

In addition to managing the business, he thinks of new iterations on the game. He’s noticed lately that when his children talk to their family back in Israel, “All the calls are boring, the same, ‘How’s school? How do you do?’” The latest edition of Our Moments is a deck focused on grandparents and children, to make those video chat sessions a bit less dull.

The audience may not always be a perfect fit for every game. Kathryn Ormsbee picked up a deck of the Hygge Game when she and her partner were about to go on regular weekend road trips between San Antonio and Austin, Tex. The questions were hit or miss, she said — one asked if same-sex couples should able to adopt, and Ms. Ormsbee and her partner, who are both women, were irritated but laughed it off. The game stayed on the floor of Ms. Ormsbee’s car for months. But something stuck. These days, she keeps it on her living room table, so that the cards are always in reach.

And while most of these games focus on the people already in your life — pushing deeper, knowing more — they can also be played with strangers. The developers of “You Don’t Know My Life,” — a getting-to-know-you game in which players write down their answers to each question on a card, shuffle the responses, and then guess who each answer belongs to — hosted “play tests” on the patio of a pizza place in North Hollywood, Calif.

In China, Apple Compromises on Censorship and Surveillance

Apple built the world’s most valuable business on top of China. Now it has to answer to the Chinese government. Source

Yes, You Can Make Your Tech Survive Obsolescence

First we buy a gadget. For the next few years, the manufacturer releases an occasional software update that fixes bugs and protects us from vulnerabilities. One day, those updates stop coming. According to conventional wisdom, […]

One challenge the F.T.C. will face is explaining why it decided not to block Facebook’s acquisitions of Instagram in 2012 and WhatsApp in 2014. Those deals, which took place during the Obama administration, were vetted […]