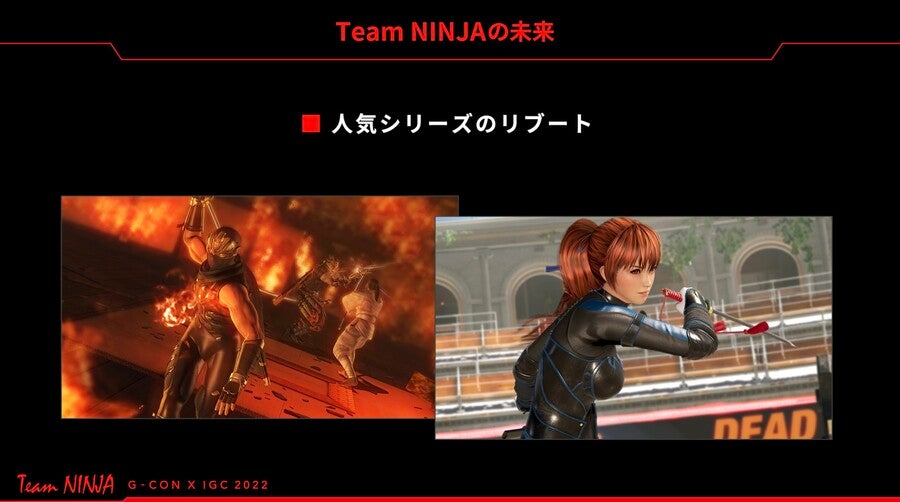 Team Ninja is reportedly rebooting both its Ninja Garden and Dead or Alive franchises.

Korean website Ruliweb reports that Fumihiko Yasuda confirmed plans to resurrect the two dormant franchises at a panel at the G-Star Conference earlier this week (thanks, VGC).

Whilst Yasuda stopped short of giving any concrete details, he reportedly said that whilst he couldn’t tell us any more right now, he hopes to deliver news we’d like to see “as soon as possible”.

If that all sounds a little woolly and vague to you, the good news is that the presentation included a clear slide with a screenshot from both franchises and entitled “The future of Team Ninja – Reboot of popular series”.

Tomonobu Itagaki – the Japanese designer best known for creating Tecmo’s Dead or Alive series and rebooted Ninja Gaiden games and left Tecmo in 2008 – announced his new company Apex Game Studios back in the summer. It is currently “incubating” an NFT-focused MMORPG for mobile and PC named Warrior.

Itagaki explained that Apex Game Studios would specialise in creating “high-quality and immersive” triple-A “Web3” titles – Web 3.0 being the umbrella term incorporating (frequently controversial) technologies such as blockchain and NFT.