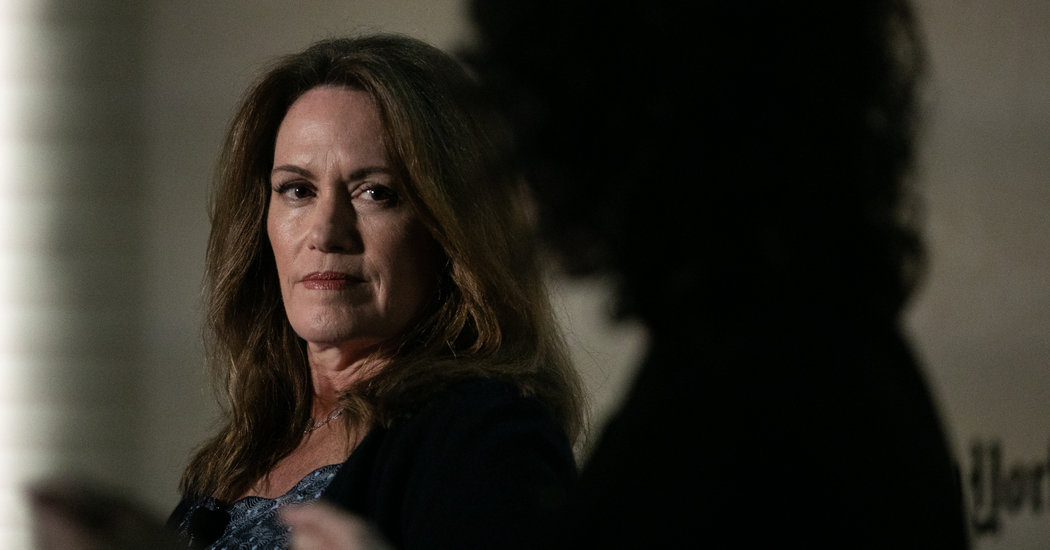 SAN FRANCISCO — Magic Leap said on Tuesday that it had hired Peggy Johnson, a top executive at Microsoft, to be its chief executive, as the troubled augmented reality headset start-up shifts its focus from consumers to businesses.

Ms. Johnson, who starts at Magic Leap in August, is joining at a critical time for the once vaunted start-up. While Magic Leap had caused excitement with a virtual-reality headset intended to show people the technology’s abilities, the product arrived after many delays to lukewarm reviews, and sales fell short of expectations.

In December, Magic Leap announced plans to focus on selling technology to businesses rather than consumers, aligning more closely with Ms. Johnson’s experience at Microsoft.

In an interview on Monday, Ms. Johnson, 58, said she had reached out to Rony Abovitz, Magic Leap’s founder and chief executive, who had announced in May that he would step down. She said she saw opportunities in Magic Leap’s “spatial” technology, which projects digital images into the real world.

Ms. Johnson, a former executive at Qualcomm who joined Microsoft six years ago, compared the spatial technology’s promise to the early days of cellular technology and cloud computing.

“It just feels to me that it’s at that same moment in time,” she said. The opportunity is even bigger during the coronavirus pandemic, with people working remotely and traveling less, she said, adding that possible uses for the technology include job training, in the medical field, and industrial automation.

Ms. Johnson is the latest experienced female or executive of color brought in to turn around a struggling company, a phenomenon that researchers have called the “glass cliff.” Last year, Linda Kozlowski, an executive at Etsy and Evernote, took over the flagging meal kit service Blue Apron. In 2018, Jill Soltau, former head of Jo-Ann Stores, was brought in to turn around J.C. Penney.

Magic Leap, which Mr. Abovitz founded in Plantation, Fla., in 2010, has amassed nearly $3.5 billion in venture funding from investors like Google, Alibaba, Fidelity and Andreessen Horowitz, valuing it at $6.4 billion, according to PitchBook.

But after its headset sales flopped, it changed course. Other makers of augmented and virtual reality headsets, including Google Glass, Facebook’s Oculus VR and Microsoft’s HoloLens, have faced similar challenges, with some shifting directions to business applications like manufacturing.

In April, Magic Leap laid off roughly 600 of its 1,900 workers. Since then, the company has secured another $375 million in funding, a spokeswoman said.

Ms. Johnson’s departure means Microsoft is losing one of the three female executives who were part of the chief executive Satya Nadella’s senior leadership team of 16. Amy Hood, the finance chief, and Kathleen Hogan, who runs human resources, are also part of the team.

Mr. Nadella had recruited Ms. Johnson from Qualcomm as one of his first executive hires after he became chief executive in 2014. At Microsoft, Ms. Johnson ran business development, brokering major partnerships and shepherding its acquisitions, including the 2016 purchase of LinkedIn for $26.2 billion, a record for the company.

In 2016, she helped start a venture capital fund at Microsoft, now known as M12, to directly invest in start-ups, largely those working in cloud computing and artificial intelligence.

Ms. Johnson said she had long aspired to be a chief executive.

“I chose this,” she said. “It really says something that, at this point in time, I would leave Microsoft to go to this space, because Microsoft is doing quite well.”

Chuck Peddle, the engineer and entrepreneur who helped launch the age of the personal computer after designing a microprocessor that sold for a mere $25, died on Dec. 15 at his home in Santa Cruz, […]

House lawmakers on Wednesday began the process of considering a legislative package that would overhaul the nation’s antitrust laws in an attempt to rein in the power of Amazon, Apple, Facebook and Google. Over the […]

Fernando Corbató, a Father of Your Computer (and Your Password), Dies at 93

Fernando Corbató, whose work on computer time-sharing in the 1960s helped pave the way for the personal computer, as well as the computer password, died on Friday at a nursing home in Newburyport, Mass. He […]