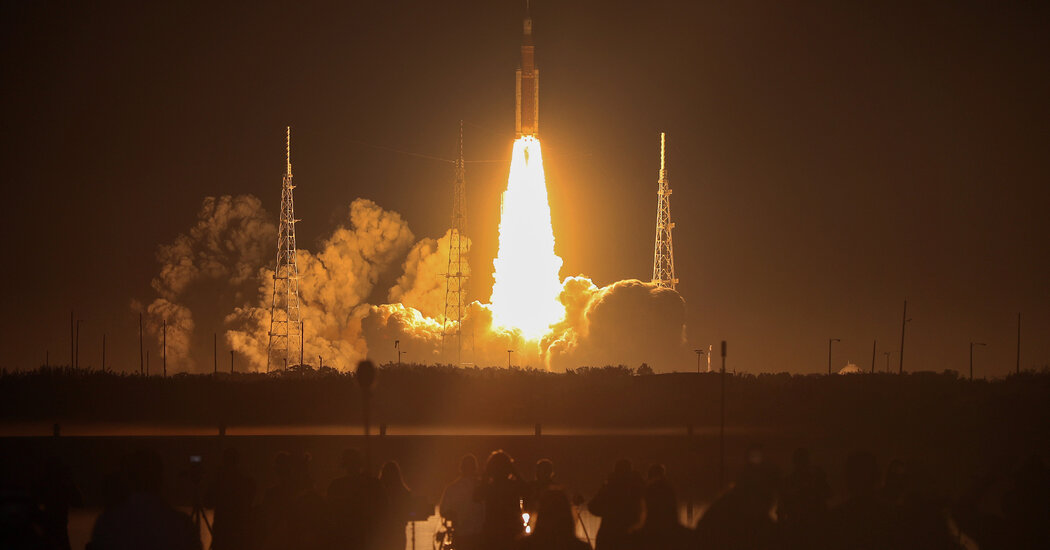 KENNEDY SPACE CENTER, Fla. — NASA’s majestic new rocket soared into space for the first time in the early hours of Wednesday, lighting up the night sky and accelerating on a journey that will take an astronaut-less capsule around the moon and back.

This flight, evoking the bygone Apollo era, is a crucial test for NASA’s Artemis program that aims to put astronauts, after five decades of loitering in low-Earth orbit, back on the moon.

“We are all part of something incredibly special,” Charlie Blackwell-Thompson, the launch director, said to her team at the Kennedy Space Center after the launch. “The first launch of Artemis. The first step in returning our country to the moon and on to Mars.”

For NASA, the mission ushers in a new era of lunar exploration, one that seeks to unravel scientific mysteries in the shadows of craters in the polar regions, test technologies for dreamed-of journeys to Mars and spur private enterprise to chase new entrepreneurial frontiers farther out in the solar system.

As China and other countries are vying to explore space, Wednesday’s launch also highlights a growing philosophical tension about how America should pursue its space aspirations. NASA has spent more than $40 billion to date to get Artemis off the ground. The expenditure illustrates how the space program continues to resemble the way that the Pentagon builds aircraft carriers and F-35 fighters — expensive and slow, but primarily controlled by the federal government because no commercial market yet exists for the kinds of large rockets and deep-space transports that NASA considers to be necessary for its moon exploration program.

The alternative approach, where NASA would be a customer or a passenger on commercial spacecraft, could be cheaper and faster, relying on innovative spacecraft built by entrepreneurial companies like SpaceX, led by Elon Musk.

“If you were serious about going back to the moon, you would just go all-in on commercial approaches,” said Charles Miller, who worked at NASA from 2009 to 2012 as a senior adviser for commercial space activities.

But the commercial approach might not exactly provide what NASA and other government decision makers want, and companies can often change plans or go out of business.

While it may not have mollified the critics, the 322-foot-tall rocket, known as the Space Launch System, or S.L.S., was an imposing sight on the launchpad. However, with the middle-of-the-night launch time, the Florida Space Coast was not as jammed with spectators as it had been for earlier launch attempts.

Wednesday’s launch attempt followed two scrubbed launch attempts in August and September, one halted by an engine that appeared to be too warm, and the other involving a hydrogen leak in a fuel line. Hurricane Ian led NASA to skip another launch window in late September and early October, and Hurricane Nicole prompted a delay by a couple of days before Wednesday’s launch.

The countdown proceeded smoothly until a hydrogen leak in a new location popped up at about 9:15 p.m. A “red crew” of two technicians and a safety officer went to the launchpad to tighten bolts on a valve, which stemmed the leak.

A faulty Ethernet switch also disrupted the countdown, cutting off data from a radar needed to track the rocket. The U.S. Space Force, which ensures safety of rocket launches from the Kennedy Space Center, replaced the equipment, and the countdown resumed.

A final poll by Ms. Blackwell-Thompson confirmed the rocket was ready to go to space.

At 1:47 a.m., the four engines on the rocket’s core stage ignited, along with two skinnier side boosters. As the countdown hit zero, clamps holding the rocket down let go, and the vehicle slipped Earth’s bonds.

At liftoff, flames from the engines were incredibly bright, like giant welding torches.

As the rocket ascended, it produced a loud rumble of sound that rolled across the space center.

A few minutes later, the side boosters and then the giant core stage separated. The rocket’s upper engine then ignited to carry the Orion spacecraft, where astronauts will sit during later missions, toward orbit.

Less than two hours after launch, the upper stage fired one last time to send Orion on a path toward the moon. On Monday, Orion will pass within about 80 miles of the moon’s surface. After going around the moon for a couple of weeks, Orion will head back to Earth, splashing down on Dec. 11 in the Pacific Ocean, about 60 miles off the coast of California.

“We’ve laid the foundation for the Artemis program and many generations to come,” said John Honeycutt, the program manager for the Space Launch System rocket, in a news conference after the launch on Wednesday.

The next Artemis mission, which is to take four astronauts on a journey around the moon but not to the surface, will launch no earlier than 2024. Artemis III, in which two astronauts will land near the moon’s south pole, is currently scheduled for 2025, though that date is very likely to slip further into the future.

In a report last year, the NASA inspector general estimated that by the time that Artemis III had returned from the moon, NASA would have spent $93 billion on the program and that each launch of the Space Launch System and Orion would cost more than $4 billion. The cost overruns were caused in part by technical problems, mismanagement and NASA’s changing plans and schedules. And like the old Saturn V, the pricey Space Launch System rocket is used just once before falling into the ocean.

By streamlining the manufacturing, “We’re hoping to get it to a cost of about $2 billion,” per launch, Sharon Cobb, the associate program manager at NASA for the Space Launch System, said during an interview in August.

By contrast, SpaceX’s Falcon Heavy rocket, while not as powerful as S.L.S., costs $90 million per launch. And SpaceX’s Starship, a giant next-generation rocket currently under development that is also central to NASA’s astronaut moon landing plans, is to be entirely reusable, and Mr. Musk has said, perhaps over-optimistically, a launch could eventually cost as little as $10 million.

For Artemis, NASA has taken a mix-and-match approach — a traditional program for the rocket and the crew capsule, and a commercial strategy for the lunar lander. NASA is purchasing from SpaceX, at a fixed price, a flight of Starship to serve as the lander for the Artemis III mission later in the decade. The Starship is to dock with Orion in orbit around the moon and take two astronauts to the surface near the lunar south pole.

The delays and cost overruns of S.L.S. and Orion highlight the shortcomings of how NASA has managed its programs, but Mr. Musk’s company, for all of the impressive technological leaps it has made so far, is also not guaranteed to solve all the development challenges of Starship as quickly as Mr. Musk might hope.

His company has been fantastically successful with its Falcon 9 rocket, following on NASA’s investment to take cargo and later astronauts to and from the International Space Station. The cargo contract provided a key infusion of money to Mr. Musk’s company, and bestowed NASA’s imprimatur of approval when SpaceX was still little known and largely unproven. It now dominates the satellite-launching business.

For NASA, this was a big win, too. Because NASA is just one of many customers for SpaceX, SpaceX can offer much lower costs.

Those successes, however, do not guarantee that Starship will also succeed. If SpaceX stumbles, NASA’s gamble on the company’s new spacecraft risks leaving the United States wasting its investment while still waiting for a moon lander for Artemis III.

Still, the sprawling expense of Artemis might be the cost of sustaining political support for a space program in a federal democracy, said Casey Dreier, the chief policy adviser for the Planetary Society, a nonprofit that promotes exploration of space. Even if Artemis is not the best or most efficient design, it provides jobs to the employees of NASA and aerospace companies across the country, he said. That provides continuing political support for the moon program.

“Congress has done nothing but add more money to Artemis every single year it’s been in existence,” Mr. Dreier said.

Politicians have so far faced little or no public outcry when voting to finance the Artemis missions. Even if it saved NASA money, the commercial approach could provoke greater opposition, feeding a perception that the agency has outsourced its space program to billionaires like Mr. Musk; Jeff Bezos, the founder of Amazon who started the rocket company Blue Origin; and Richard Branson, whose Virgin Galactic flies tourists on short suborbital flights.

Consider the ire of many people toward Mr. Bezos and Mr. Branson last year when they made suborbital trips to space built by the companies started with their wealth. That Mr. Branson and Mr. Bezos did not rely on federal financing to start their space tourism businesses did not assuage the anger that space seemed to be turning into the playground of the superwealthy.

Thus, a decision to turn to companies like SpaceX and Blue Origin could set off criticism that NASA was just adding to the wealth of billionaires who would one day escape from worldly troubles to private space stations and off-world colonies.

“By aligning our space program with very famous, idiosyncratic individuals, that could potentially be the bigger political risk, to me,” Mr. Dreier said.

Commercial space advocates argue that history does not back up this dystopian view. Rather, they point to entrepreneurs a century ago who transformed aviation from a luxury available to only a few into safe, affordable transportation for almost everyone.

While private spaceflight proponents believe their approach will prevail, no one in Congress has yet pushed for canceling S.L.S. or Orion. The CHIPS and Science Act, signed into law by President Biden, calls for NASA to include the vehicles in plans to send astronauts to Mars and directs the agency to launch S.L.S. at least once a year.

NASA is currently negotiating with the rocket’s manufacturers for up to 20 more launches.

“I think the program itself is shaping up to be very politically sustainable,” Mr. Dreier said. “I challenge people to show me the public anger about the S.L.S. program and how it translates to political pressure to cancel it. And I just don’t see it.”

Lessons from how the U.S. (poorly) handled Chinese phone and internet technology. Source

No, Ocasio-Cortez Didn’t Make Up Her Capitol Riots Experience

Going to the Moon via the Cloud

Before the widespread availability of this kind of computing, organizations built expensive prototypes to test their designs. “We actually went and built a full-scale prototype, and ran it to the end of life before we […]