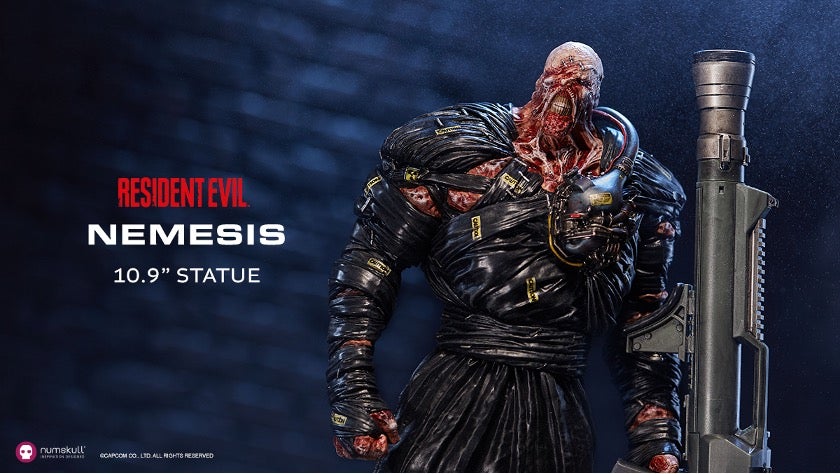 Gaming merchandiser Numskull has confirmed the next addition to its Resident Evil statue line-up: Nemesis.

Standing 10.9 inches (27.7cm) high, the Nemesis figurine includes “hand-painted features for extra detail” – including the cracked tarmac base and hazard tape – and has been developed in conjunction with Capcom.

You can see him in all his grotesque glory in the video reveal below:

“Possessing vastly superior intelligence, strength and regenerative abilities to its lesser counterparts, Nemesis is a truly terrifying creature to behold,” Numskull says. “With its only purpose to track down and eliminate S.T.A.R.S members, it’s no surprise this powerful monster carries the name ‘Pursuer’ as it proves to be completely relentless in its hunt.”

For other Resi-flavoured statutes in the same range, there’s also the Tyrant (T-002) and exquisitely detailed Licker up for pre-order, too.

Styled on the variant found in Silent Hill 2 rather than Homecoming or the movies, the 9-inch tall “super-exclusive” statue is officially sanctioned by Konami and comes “with all the finishing touches that fans would expect to see”. For me, though, the most exciting part of this announcement is the silhouette at the end of the teaser that suggests a figurine celebrating Silent Hill 3’s Heather Morris (no, not a typo), is up next.

There’s also a fantastic Lord Shaxx Destiny 2 figurine up for pre-order now, too. He should be coming to a Crucible match near you in October.