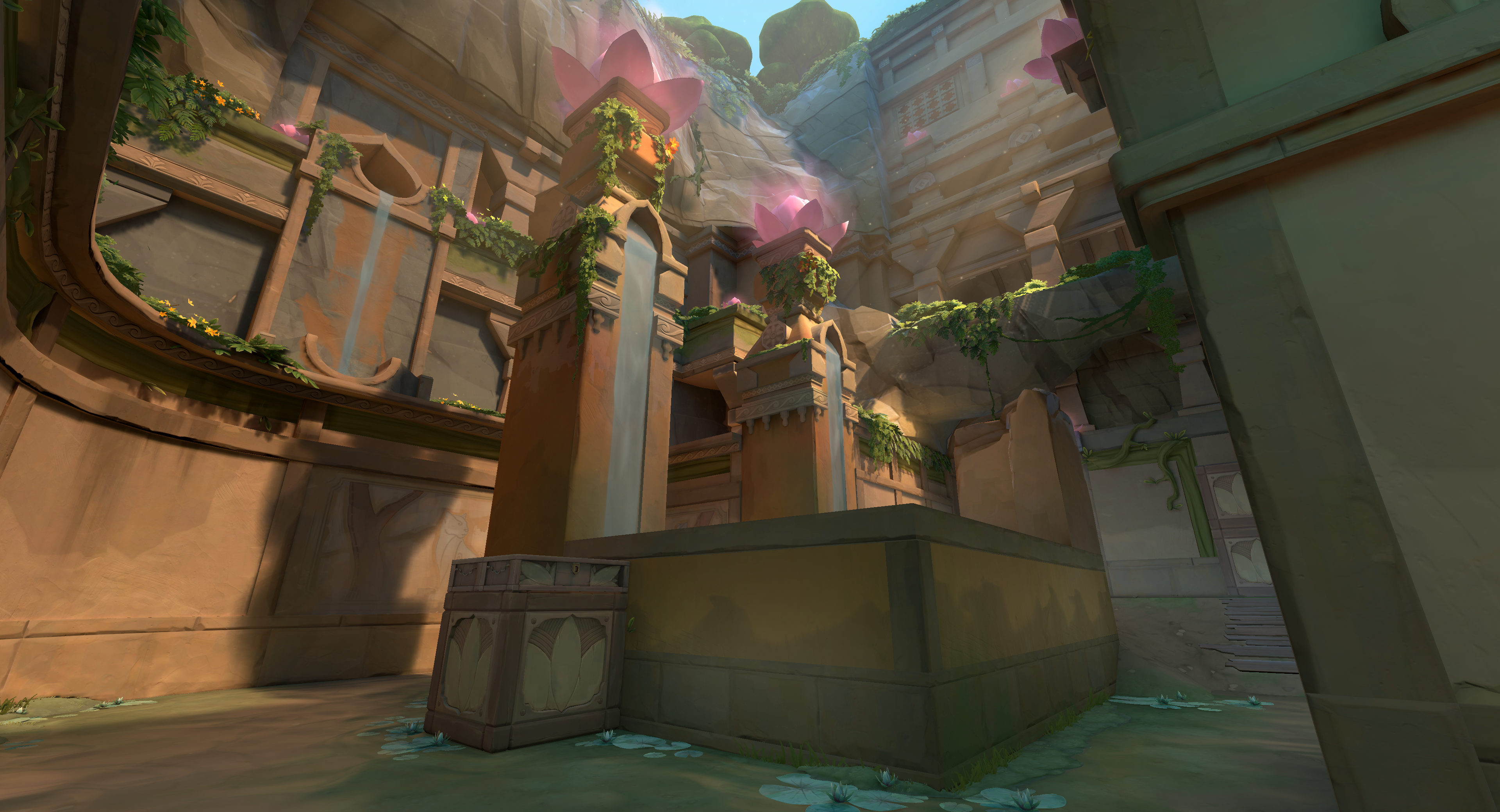 A 3-site map like Haven, Lotus is “inspired by traditional Indian stepwells, rock-cut architecture and Dravidian style structures” and offers new environmental features such as “rotating doors and destructible walls”. You can check it out in the teaser video below:

“We wanted to make another 3 site map and show that this is more of a format we’ll keep using than just a single map. Additionally, we aimed to make a map with high flexibility and movement for both teams,” said level designer, Joe Lansford.

“When we were exploring the conceptual aspect of this map, we wanted to push the boundaries of fantastical and mystical elements, which were not shown in our earlier maps. In Lotus, we were more free to explore more fantastical visual elements since Kingdom was not present on this map,” adds Brian Yam, concept art lead.

“We wanted to explore the theme of grand adventure, mysteries lost to time, and a lost ancient structure. Indiana Jones was one of the thematic inspirations we drew from. Visually, we found the rock cut architecture fascinating because it evokes a mystical and ancient vibe to the theme.”

Lotus will drop as part of Episode 6 and Act 1 on 10th January 2023, when you can also expect a new battlepass that features a “9 Lives” classic gun skin and items inspired by New Year and Valentine’s Day. There will also be a new Araxys skinline available, too.

“The story is that these weapons were once wielded by an aggressive and dangerous alien race; large creatures, armoured in hard unpierceable scales, who wielded advanced weaponry that could vaporise their enemies in the blink of an eye,” explains producer 2, Victoria Kim.

“Driven only by their bloodlust, they conquered the stars and destroyed galaxies without sway, without mercy. And these guns are their legacy, weapons modelled in their form which keeps the memories of that hostile race alive, and with the threat of their return ever-looming upon the horizon of its unworthy wielders.”

ICYMI, Riot Games is suing NetEase for “substantial” damages over the similarities between its cooperative shooter Valorant and NetEase’s mobile title, Hyper Front.

The lawsuit – filed in various countries right across the world, including the UK and Germany, due to varying copyright laws – maintains free-to-play Hyper Front is “a copy of substantial parts of Valorant”, including its “characters, maps, weapons, weapon skins, and charms”.