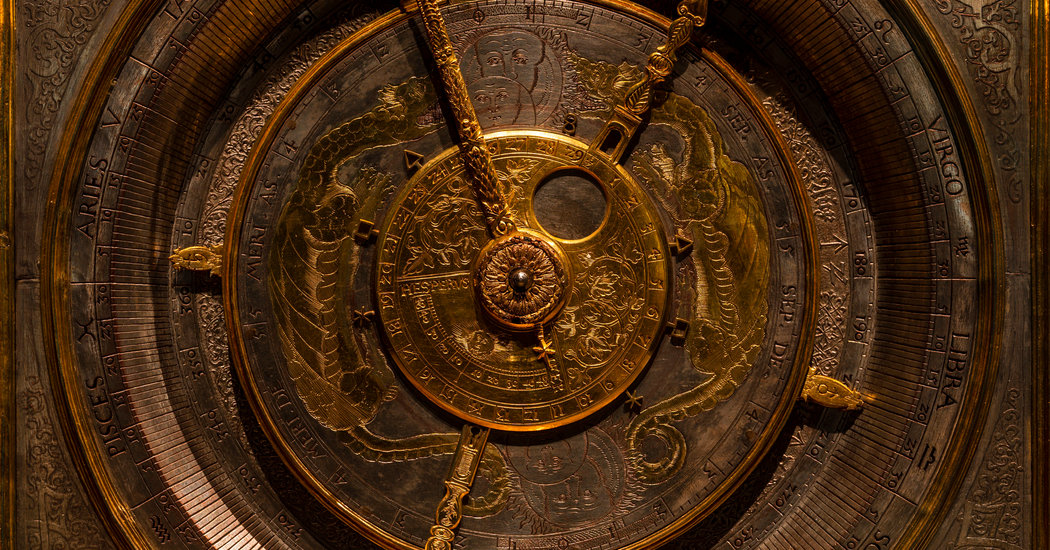 You could walk through “Making Marvels” — the Metropolitan Museum of Art’s show of 16th- to 18th-century mechanical wonders that double as exquisite works of art — and miss the news.

“Making Marvels” brings together hundreds of elaborately crafted objects, many never seen in the United States: an ornate silver table decorated with sea nymphs, for example, or a clock with Copernicus depicted in gilded brass. Some, like a chariot carrying the wine god Bacchus, are spectacularly inventive — Bacchus can raise a toast, roll his eyes and even stick out his tongue. Some, like a charming rhinoceros, a collage created from tortoiseshell, pearls and shells, are merely lovely.

So “Making Marvels” is a parade of science and splendor, not always in that order. But the news? Discreetly displayed in the show is one prize jewel that was not stolen in a brazen heist 4,000 miles away.

In late November, thieves struck the Royal Palace in Dresden, Germany, home to one of Europe’s largest collections of art treasures. They smashed a display case in the Grünes Gewölbe, or Green Vault, and made off with dozens of precious items, including a 49-carat diamond known as the “Dresden White.”

They did not get the mesmerizing 41-carat “Dresden Green,” perhaps the world’s fanciest hat pin — a pear-shaped stone in an elaborate setting intended to dangle from a tricorn. Typically kept in another room at the Royal Palace, it was already at the Met, shimmering away in “Making Marvels,” which continues through March 1.

Dirk Syndram, the director of the Green Vault, said it was “a great relief” that the “Dresden Green” was in New York when the thieves broke in. The Met would not say whether it had stepped up the security for the “Dresden Green.”

The police in Dresden say they still have no leads. A Berlin newspaper, the Berliner Morgenpost, cited an unnamed source as saying the Dresden theft might be linked to a similar break-in at the Bode Museum in 2017. There, thieves hauled away a 221-pound gold coin that was never recovered and is believed to have been melted down. Three suspects are now on trial for the Berlin caper; the police in Dresden have declined to comment on whether they believe there is a connection between the two cases.

Wolfram Koeppe, the Met curator who assembled “Making Marvels,” remembers seeing the “Dresden Green” as a child in the 1960s, when Dresden was part of East Germany but was opened to travel from West Germany. “I just was fascinated by that color,” he said, strolling through the exhibition. “It’s not that it was my favorite color.”

What intrigued him was its rarity, and its very existence: How had the “Dresden Green” been created, deep in the earth, and propelled close enough to the surface to have been found?

That fascination with how things came to be permeates “Making Marvels.” The exhibition could be simply a display of ornamental wealth for the One Percent of long ago, an abundance of gold and silver that was meant to be shown off in any way possible. But “Making Marvels” is about more than that. Mr. Koeppe asserted, in the lavish book that combines photographs from the exhibition with scholarly essays, that such treasures were essential to governing.

Mr. Koeppe said that the “Kunstkammer,” or cabinets of curiosities that European nobles maintained as “thoughtfully selected collections of objects and instruments, each more beautiful, ingenious or wondrous than the next,” were valued for artistic and technological refinement. The idea was to showcase a sovereign’s erudition.

In other words, knowledge was power. “The more knowledge that a ruler could collect about the world, the more control he was perceived to have over his realm,” Mr. Koeppe wrote. “Princely patrons sought to advertise their advanced learning through their collecting practices.” Scientific instruments became status symbols.

None was more intricate than the machine at the entrance to “Making Marvels,” a planetary clock known as the Imser Clock for Philipp Imser, a 16th-century mathematician who was involved in building it. Its wondrously complicated dials were designed to follow the planets’ wobbly course, but it is also a conventional clock: The minute hand is a figure of a woman that makes a full circuit every hour.

Just beyond the Imser Clock is a riot of silver — the Judgment of Paris desk, which Prince Paul Esterházy I probably acquired from Emperor Leopold I. It shows a mythological scene in which a young prince decides between three goddesses. Nearby are a pair of large silver fountains and basins. They weigh almost as much as 1,900 thalers, the German currency of the time, and that was their value — an astonishing amount. By contrast, Mr. Koeppe said, Mozart was paid 225 thalers a year as an organist in Salzburg, while the royal clockmaker in Munich earned only 200 a year.

Silver furniture was the most obvious demonstration of wealth, “as not many aristocrats could commission such an extravagance,” he said. But there was a catch: “Silver furnishings practically had one foot in the melting pot from the moment of their delivery, for in times of warfare and privation, such objects were the first to be handed over to the mint.”

“Making Marvels” has silver cups that escaped meltdown. One looks like a gilded fox chewing a goose in its shiny silver fangs. It was intended to be symbolic: A guest invited to take part in a welcoming ritual would drink from a vessel that represented the host — in this case, Heinrich von Bobenhausen, leader of the influential Teutonic Order of Knighthood from 1572 to 1590.

Tools play a major role in “Making Marvels,” because princes competed to own the latest and were expected to know how to use them. Turning at the lathe, for example, “demanded self-control and patience,” Mr. Koeppe wrote. “Without these traits, a turner could easily damage a piece if his concentration wavered. Such forbearance was thus interpreted as a metaphor for good governance, as a similar slip in attention while ruling could endanger the integrity of one’s realm and his people.”

Another royal device was a wire-making bench that is nearly 15 feet long. Its wooden case is “sort of like an illuminated manuscript,” Mr. Koeppe said. “You had sections you could explain to your guests in the evening. You have to imagine it being lit by candlelight.” The hunting scenes would have appealed to Augustus the Elector, who commissioned the bench. It was installed in his Kunstkammer in Dresden in 1566.

That was one kind of machine. Another was a writing device that was presented to Empress Maria Theresa in 1760. It was the work of Friedrich von Knaus, whom Mr. Koeppe credits with inventing the precursor of the first typewriter, and is programmable. Imagine using that word about a device from the 18th century, but Mr. Koeppe does. It can write “any preprogrammed text of up to 107 words,” he said. A gilded statuette connected to an intricate arrangement of cams, levers and axles does the writing with a stylus it holds at an uncomfortable-looking angle.

It is shiny, but nothing sparkles like the “Dresden Green” — and Mr. Koeppe knows it. If he walks by and sees a smudge left by a visitor who has somehow touched its tall, clear case, he pulls out a handkerchief.

Making Marvels: Science & Splendor at the Courts of Europe

The couple were accused of conspiring to launder Bitcoin that had been stolen in 2016 from Hong Kong-based Bitfinex, one of the world’s largest virtual currency exchanges. Source

A High-Tech Twin for a Renaissance Masterpiece

FLORENCE, Italy — For the past five centuries, Michelangelo’s David has been celebrated for its sculptural perfection and its embodiment of youthful beauty and strength. Now, Italian officials want the sculpture to help showcase Italian […]

A Walk on the Frontier of Art, Where the Sky Is the Limit

This article is part of our continuing Fast Forward series, which examines technological, economic, social and cultural shifts that happen as businesses evolve. When walking on the High Line, it’s tough to look more lost […]