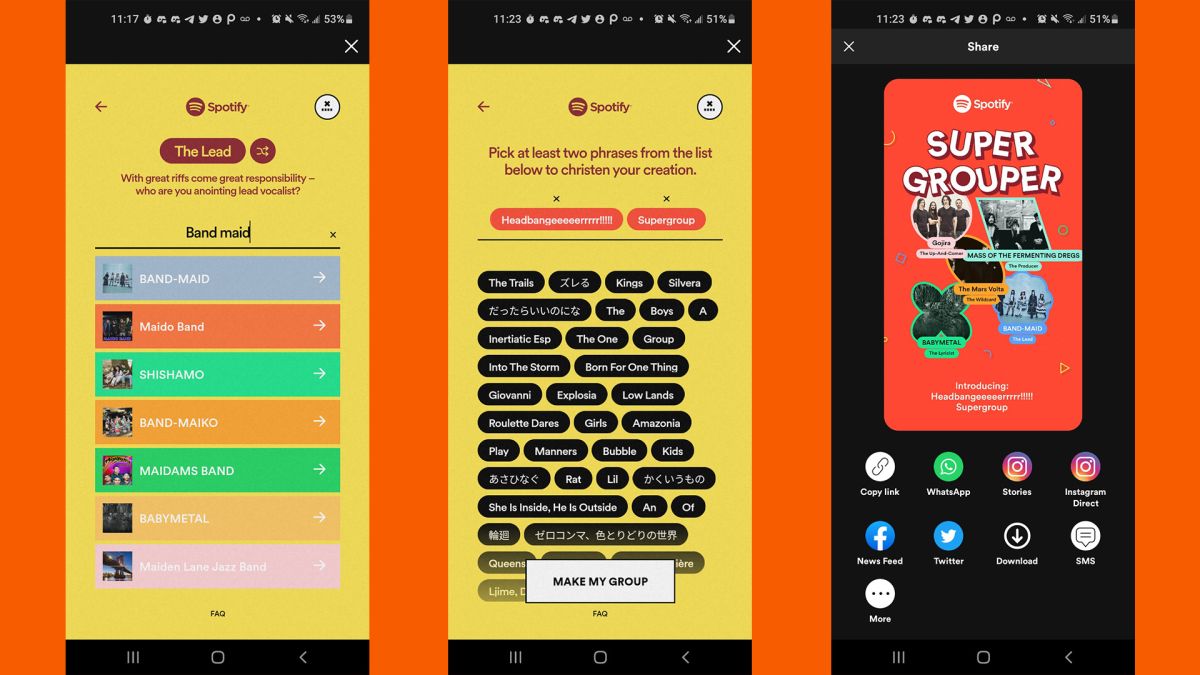 Spotify is rolling out Supergrouper, a new feature for creating playlists and living out your supergroup fantasy.

The idea behind Supergrouper (opens in new tab) is for users to imagine what it would be like if their favorite musical artists came together to form one giant band. But Songs aren’t going to be melded together to form a new song as you might think — Stairway to Heaven merged with Adele? No thanks. Instead, the feature is essentially just an easier way to create playlists without having to pull together songs one by one.

To create a playlist, you first have to go to the Supergrouper website (opens in new tab) on your mobile device. (Visit on a desktop or some other device and Spotify will just tell you to use your phone.) You can choose between three to five musical artists to make up the group.

From there, name your newly christened supergroup and share it on social media. And if you’re stuck on what to include in the playlist, Spotify has a randomizer button near the top that’ll throw in an artist based on the choices made.

Supergrouper is currently available to users living in the US, UK, Australia, New Zealand, and the Philippines. We did ask Spotify if they have plans to expand support for the feature. A representative for the company told TechRadar they’re sticking to those five countries for now.

The addition of Supergrouper is really a continuation of Spotify’s efforts to roll out more personalization features. On June 23, the platform replaced its Concert Hub section with the Live Events Feed (opens in new tab). It allows music fans to find concerts and other live events happening in their local area according to their tastes. The platform states it’s teaming up with major ticketing partners, like Ticketmaster, to make the service work.

Spotify is also working on bringing the fan-favorite Community desktop feature to mobile. Currently it’s being tested, but according to the reports, Spotify Community is slated to be a new tab for the smartphone app. When it launches, the tab will display what songs your friends are streaming and let you listen to any newly created new playlists.

If you’re interested in seeing what else Spotify has been cooking up, TechRadar recently wrote about the new Karaoke mode on the mobile app. You don’t even have to be a premium member to start belting out the lyrics to your favorite song — but you will need to update the app.