The long-in-development remake of System Shock will finally be released this March.

This news comes by way of a new Kickstarter update from developer Nightdive Studios, which states the team has picked “a few last things to share before our quickly approaching launch window of March 2023.” as reported by Video Games Chronicle. This remake, which is set to hit PlayStation 5, Xbox Series X/S, PlayStation 4, Xbox One, and PC has had a 2023 release year attached to it for a minute now, but this new Kickstarter update points attention to the game’s Steam page, which now features a “March 2023” release window. 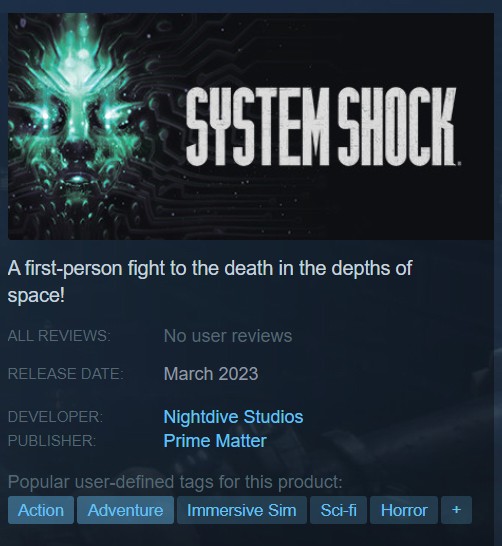 “As some of you have already pointed out, this is not our first time announcing a tentative launch window, but over the past few years, much has changed – the scope and scale of the project has evolved dramatically and with [publisher] Prime Matter joining the project, it’s enabled us to focus on quality-of-life improvements, bug fixing, and localization support – the last major steps towards releasing a game we’re all incredibly proud of,” the update reads. “This has also given us time to go back and polish various aspects of the game that needed that extra shine.”

The update then goes into detail on the various changes, effects, and features that will be present in the remake so if you’re interested in a deeper dive, head there.

The last time we saw System Shock was in a trailer released last June during the PC Gaming Show, but it’s been on Game Informer’s big list of upcoming video game remakes for a while now. News of this March 2023 release window is great, especially for fans who have kept up with the game’s journey through development hell. Here’s hoping this release window sticks.

In the meantime, read about how Warren Spector says Otherside Entertainment hasn’t worked on System Shock 3 in three years, and then check out this story about how a live-action System Shock TV series is in the works, exclusively for video game-focused entertainment streaming platform Binge.

Are you excited for this System Shock remake? Let us know in the comments below!