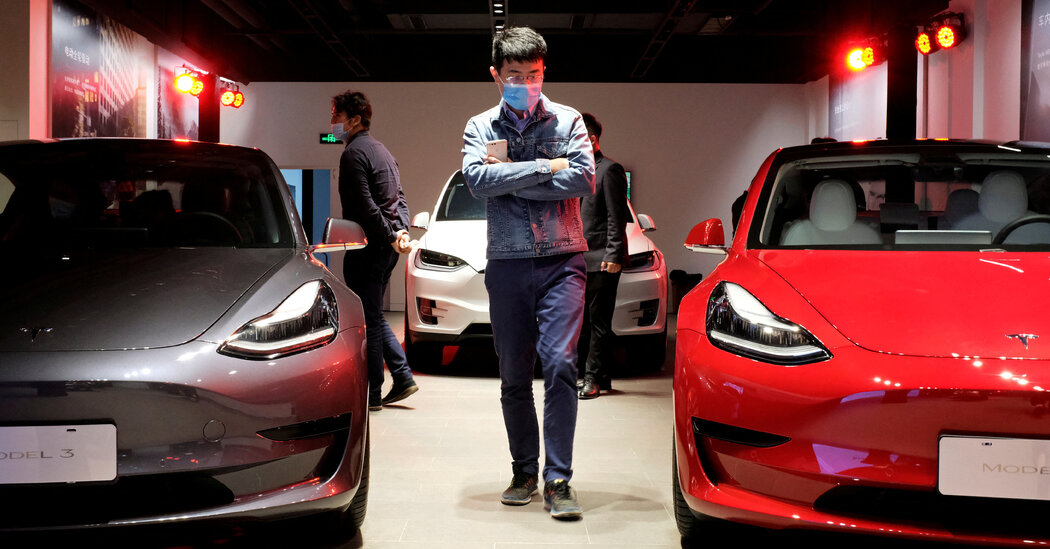 Tesla sales in China, the world’s largest car market and a crucial element of the company’s fortunes, slumped at the end of 2022 as domestic manufacturers like BYD gained ground with lower-priced electric vehicles, according to data published Thursday.

Tesla sold around 56,000 cars in China last month, a decline of 21 percent from a year earlier, and 44 percent from the previous month. For the full year, Tesla’s Chinese sales rose nearly 50 percent, according to data published by the China Passenger Car Association.

China accounts for roughly 40 percent of Tesla’s sales. Concern about the carmaker’s performance there has been a significant factor in the precipitous decline of Tesla’s share price last year. The company’s stock closed down about 3 percent on Thursday.

Tesla has grown rapidly in China but is facing increasingly stiff competition from companies like BYD, which sells well-regarded cars at lower prices and is the country’s No. 1 electric vehicle brand. BYD sales including hybrid vehicles more than doubled in December from a year earlier, and rose 2 percent in December from November, according to the Passenger Car Association’s data.

China is considered key to Tesla’s global ambitions. In contrast to the United States and Europe, overall auto sales there are still rising because many people do not own cars, or own just one vehicle. The Chinese government has heavily promoted electric vehicle ownership as a solution to urban air pollution, though it has slashed subsidies recently.

“When you are not active in the largest market in the world, you are nowhere,” Axel Schmidt, a senior managing director at Accenture who oversees the consulting firm’s automotive division, said before publication of the sales figures.

Tesla’s factory in Shanghai is considered one of the company’s most efficient plants and supplies cars to Europe and other parts of Asia in addition to China. The figures published Thursday include exports. The Shanghai factory was forced to shut down repeatedly during 2022 because of supply chain problems and pandemic lockdowns.

China is in the midst of a pandemic crisis after the government abandoned its “zero Covid” policy in the face of public protests, lifting draconian quarantine and lockdown measures and triggering a surge in cases.

The Tesla sales decline has to be viewed “in the context of the massive Covid outbreak” in December, Gary Black, managing partner of the Future Fund, an investment firm that owns Tesla shares, said on Twitter.

Overall, sales of hybrids and cars powered solely by batteries in China were flat in December compared with November, the association said.

There have been other signs that Tesla was suffering from softening demand for its products in China. The company has cut prices for the Model Y and Model 3, the two vehicles it makes in Shanghai. The company’s website says vehicles can be delivered in as little as a week — last year, waits stretched to months.

Analysts say Tesla could be vulnerable to political tensions between the United States and China. Elon Musk, the company’s chief executive, has courted the Chinese government, suggesting, for example, that Taiwan become a special administrative zone of China as a way of ceding more control to Beijing. Taiwan refuses to relinquish any control to China or compromise its independence, and Mr. Musk’s remark angered leaders in Taipei.

Another concern for Tesla: BYD and other Chinese automakers have begun selling cars in Europe. Their expansion could cost Tesla, Volkswagen and other automakers sales and market share when many European car buyers are replacing combustion engine vehicles for battery-powered cars.

“The major worry now overhead for Tesla is that the demand story, especially out of China, is showing heavy cracks in the armor at a time that E.V. competition is steadily increasing,” Daniel Ives, an analyst at Wedbush Securities, said in a note to clients on Wednesday.

China Sharpens Hacking to Hound Its Minorities, Far and Wide

SAN FRANCISCO — China’s state-sponsored hackers have drastically changed how they operate over the last three years, substituting selectivity for what had been a scattershot approach to their targets and showing a new determination by […]

After targeting the ride-hailing platform days after its I.P.O., regulators on Monday moved against more companies that had recently listed on Wall Street. Source

In an about-face, Lordstown Motors says it has enough money and will start building trucks.

A day after ousting two top executives, the electric truck start-up Lordstown Motors said on Tuesday that it was on track to start production in September even if it does not raise additional funding, contradicting […]