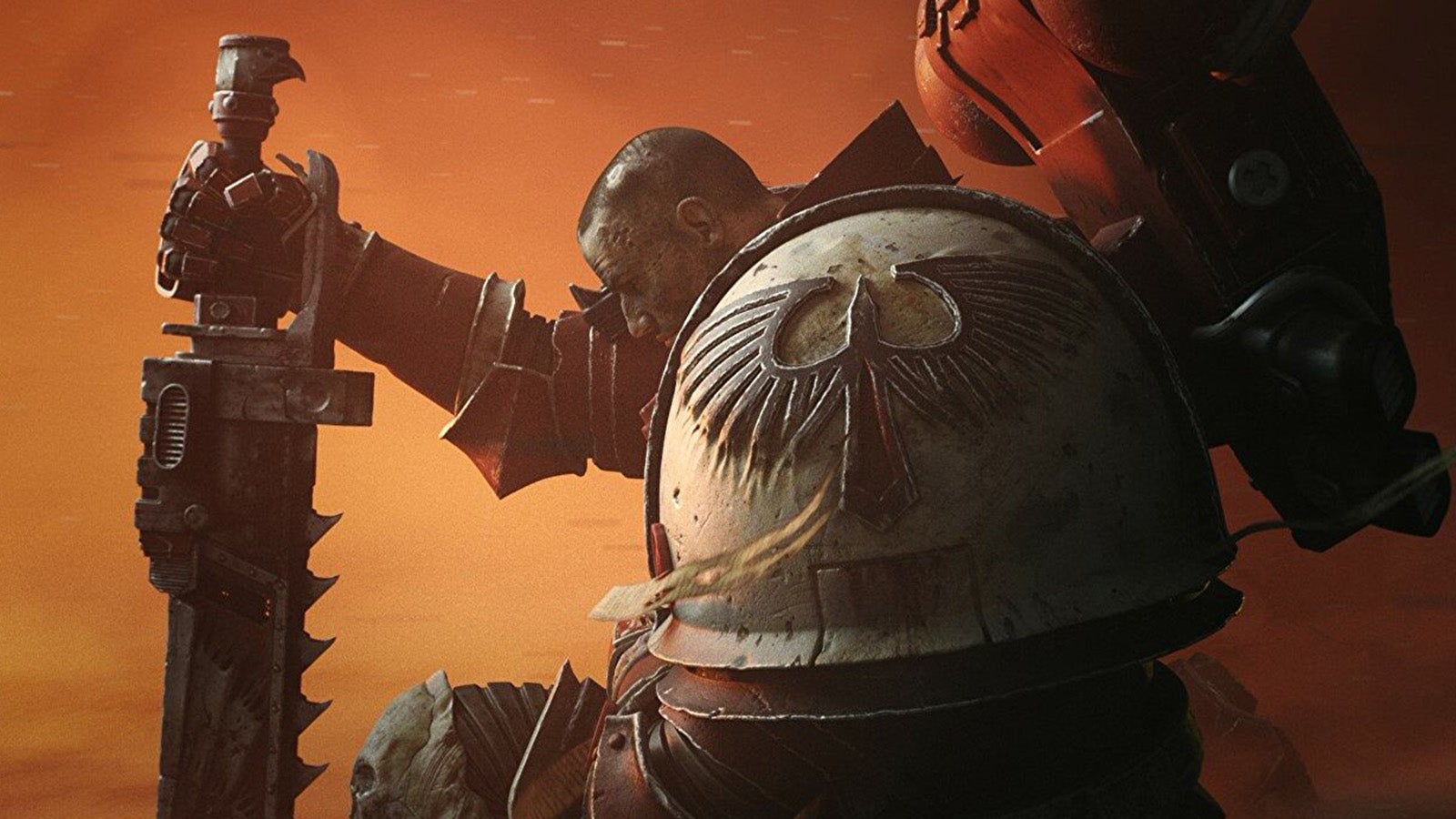 In the grim darkness of the far future there is only war… and if Games Workshop has its way, plenty of Warhammer 40,000 video games to play.

The sci-fi tabletop universe is enjoying a video game boom, with a handful of great games set within its very grim and very dark universe launched in recent years. Where there was nothing but an endless stream of mediocre Warhammer 40,000 games to play, like the terrifying Tyranids, the genre has adapted, improved and launched yet another wave, better than what came before.

Below you can find our recommendations for the best Warhammer 40,000 games!

Black Lab’s turn-based strategy game is arguably the best video game version of the Warhammer 40,000 tabletop available to play right now. It’s “battle-scale”, which means the gameplay is of a scale bigger than an XCOM-style game, or the superb Warhammer 40,000 Chaos Gate Daemonhunters, but smaller than the likes of Warhammer 40,000: Armageddon.

The Blood Angels chapter of the Space Marines takes centre stage here in a fierce battle against the relentless onslaught of the Tyranids, but Black Lab has added the Necrons as a DLC faction, with more to come. I had an absolute blast smashing through the Battlesector campaign, fussing with my list for each battle, then executing my carefully laid plans against the xenos. Some of the models on show are impressively-detailed, with nice animations for combat. If you’re into Warhammer 40,000 and like video game strategy, Battlesector is a great shout.

Don’t let the awfully clunky name put you off: Warhammer 40,000 Chaos Gate Daemonhunters, from Complex Games, is a wonderful take on the 40K / XCOM dream. There are a lot of reasons to love this multifaceted strategy game, from the voidship-level resource management to the fun interactions between the three opposing personalities of Inquisitor, Grey Knight and Tech Priest, with the occasional interjection from a stern veteran played by Andy “Gollum” Serkis.

The story, which sees the mysterious Grey Knights chapter struggle to contain a devastating new plague concocted by the forces of Chaos god Nurgle, doubles down on the grim dark and it’s all the better for it. With fun voice acting and a few decent twists along the way, Daemonhunters will keep you interested in its chunky campaign.

Be warned: Daemonhunters can be very difficult! You enter each battle with a single squad of Grey Knights, each supremely powerful but not invulnerable. It’s easy to get overwhelmed and find yourself failing missions, even on lower difficulties. But this is where the brilliance of Daemonhunters comes to the fore: Warhammer 40,000 is a grim and dark universe in which humanity is on the brink of extinction. It seems fitting that in Warhammer 40,000 Chaos Gate Daemonhunters, you’re never too far from it yourself.

There’s never been a better time to play Relic Entertainment’s brilliant Warhammer 40,000 Space Marine, which received a surprise special Anniversary Edition on PC in 2021. Relic left its strategy roots behind to create a fun third-person hack-and-slash/shooter hybrid that, while failing to set tills alight for now defunct publisher THQ, went down well among Warhammer 40,000 fans. You play an Ultramarine versus the Orks, with a heavy emphasis on melee (you heal via executions). It’s a bloodfest and so it should be!

Space Marine became something of a cult classic among Warhammer 40,000 fans. It’s not particularly sophisticated, but it does exactly what it says on the tin: you play a Space Marine and you knock lumps out of hordes of Orks. You could do a lot worse while waiting for the promising-looking sequel, Warhammer 40,000 Space Marine 2, than dip into the original.

Sticking with Relic Entertainment, we brave the warp as we move into real-time strategy territory with the eternally brilliant Dawn of War 2. Relic raised eyebrows with this sequel for ditching the traditional RTS base-building of the first Dawn of War game in favour of micromanagement of a small number of Blood Ravens squads, each led by a powerful hero character. The decision paid off, because Dawn of War 2, perhaps more so than any other video game, captured the weight and heft of the Warhammer 40,000 universe.

Everything from the ear-bursting audio (those bolters really bang!) to the detailed, smooth animations make Dawn of War 2 look and feel like Warhammer 40,000 come alive. The campaign, which now, years later, is perfectly replayable, tasks you with making difficult decisions about which battles and even planets to fight in, with sometimes dire consequences.

While the Space Marines are the main event here, other playable armies include the Orks, Eldar and Tyranids, as well as the Chaos Space Marines and Imperial Guard via expansions. There’s something for everyone here. For the Emperor!

For some grizzled old veterans, Relic’s Dawn of War remains the best Warhammer 40,000 video game ever made. This traditional real-time strategy game is as dark and gothic as you’d want, with heavy-duty base building and large scale battles that revolve around capturing strategic locations. Sure, Dawn of War has aged visually, but its spirit burns as brightly now as it did when the game came out in 2004. And those unique combat animations still look the part.

There are loads of factions to play with, too. Dawn of War launched with four playable races (Space Marines, Chaos Space Marines, Orks and Eldar), but post-launch saw the addition of the Imperial Guard, the Tau, the Necrons, Sisters of Battle and even the Dark Eldar. If you want some chaotic RTS gameplay with everything happening everywhere at once, Dawn of War is for you.

Warhammer 40,000 Dawn of War 3 failed in such dramatic fashion that it caused Relic to abandon the game – and we haven’t heard a peep out of Dawn of War since. It’s a real shame, not just for fans of the series, but for those who found Dawn of War 3’s ill-judged mix of RTS and MOBA a decent enough time.

Of course Dawn of War 3 isn’t the best Dawn of War game, but it’s got a lot going for it, I think. It’s a shame only three factions (Space Marines, Orks and Eldar) are available to play, particularly given the variety on offer in previous Dawn of War games, but Dawn of War 3’s towering Titans always get my blood pumping, even if the units running about their feet aren’t the most inspiring. The mighty Imperial Knight, Gorkanaut and Wraithknight all make an appearance on the battlefield, with devastating effect.

If nothing else, including Dawn of War 3 in this list provides us with an excuse to rewatch Dawn of War 3’s incredible announcement trailer – even now it raises the hairs on the back of my neck.

Tindalos Interactive’s real-time tactics game Battlefleet Gothic: Armada 2 focuses on Warhammer 40,000 space battles. This means there’s loads of “engaging engines!” and “systems failing” barked about the bridges of various void ships. “Captain! Xenos contact!”… you get the idea. It’s an absolute blast to see these gargantuan spaceships shooting each other to bits in space. Who needs a Space Marine when you’ve got a planet-destroying stellar vessel actually called Planet Killer?

Battlefleet Gothic: Armada 2 is set during the Black Legion’s 13th Black Crusade (there’s a lot of black when it comes to Chaos Space Marines!). The Imperium is, as it always is, on the cusp of extinction, with Abaddon the Despoiler running rampant around the Eye of Terror. It’s the perfect canvas upon which to create chunky, satisfying space battles, it turns out. Boom!

The campaign offers three perspectives to choose from: the Tyranids, the Necrons, and the Imperium. The idea is you reclaim worlds lost to the Black Crusade and put them to use within your faction. This one’s great for Warhammer 40,000 fans who are after a bigger picture perspective and even bigger battles. It’s also a fun setting for those up on the lore (the Gathering Storm, etc). The story includes famous Warhammer 40,000 characters currently making moves in the latest developments, such as ancient Adeptus Mechanicus chief Belisarius Cawl and Space Marine primarch Roboute Guilliman.

Bulwark Studios’ brilliant turn-based strategy game revolves around the Adeptus Mechanicus, the machine god-worshipping cyborg priest army of the Imperium. The Ad Mech, as they’re affectionately known, are on a quest to salvage ancient technology from the catacombs of a Necron Tomb World. Things are dark, but also bright in a neon in the dark kind of way.

Mechanicus involves upgrading and outfitting your tech priests using the resources and equipment you’ve gathered while out on missions, and of course the missions themselves, which fuse exploration and turn-based combat encounters. The Adeptus Mechanicus rarely enjoy centre stage in Warhammer 40,000 video games, so it’s refreshing to zero in on this crucial faction of the Imperium. And it’s always great to see the Necrons clank about in the dark.

Armageddon takes Warhammer 40,000 into hex-based territory in a strategy game that sees players lead the Armageddon Steel Legion of the Imperial Guard against the Orks – with a little help from the Space Marines (the Salamanders, Blood Angels and the Ultramarines all lend a hand). Any fan of the Panzer Corps games will feel right at home with Armageddon, which is set on a polluted hive world packed with lava canyons and acid rivers. This 2014 40K game is creaking at the seams as it approaches its 10th birthday, but it still offers an engrossing fight against the greenskins.