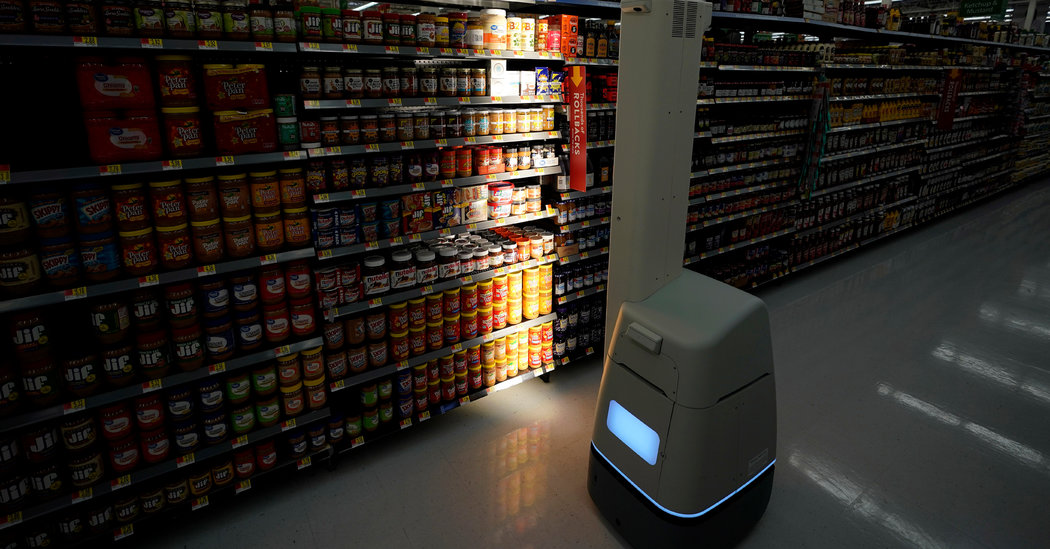 Each week, we review the week’s news, offering analysis about the most important developments in the tech industry.

Hi, I’m Jamie Condliffe. Greetings from London. For one last time before I leave The New York Times, here’s a look at the week’s tech news:

The story usually goes like this: Automation is going to take our jobs.

But the reality is far more nuanced, and debate rages about which jobs will be automated, at what scale and where. For the most part, one thing is agreed on: Blue-collar workers who perform repetitive work are most exposed.

That might not be quite right, though. A study published by the Brookings Institution on Wednesday looks at the degree to which professions are exposed to A.I. by comparing job descriptions with patent descriptions of new A.I. technologies, a method developed by the Stanford researcher Michael Webb. It found that A.I. will be “a significant factor in the future work lives of relatively well-paid managers, supervisors and analysts,” including those in relatively technical roles.

Perhaps the most surprising finding: Holders of bachelor’s degrees would be exposed to A.I. over five times more than workers with only a high school degree.

“Lots of math, science, technology and business roles involve, say, operating a power plant to maximize energy efficiency, or running an ad campaign to minimize cost per click,” explained Mark Muro, a senior fellow at Brookings and one of the study’s authors. “And these are exactly the things that A.I. is best at.”

Previously, similar studies lumped together robotics and A.I. But when they are picked apart, it makes sense that A.I. — which is about planning, perceiving and so on — would hit white-collar roles.

Still, workers needn’t panic. Carl Benedikt Frey, an economist at Oxford University who specializes in technology and employment, said A.I. was “more likely to complement people in those jobs rather than replacing them.” And Mr. Muro points out that “these workers are frequently the ones that companies have already invested in” and are likely to have been consulted about their futures.

Mr. Muro added: “I for one am a bit less concerned about the white-collar folks than the less educated ones stuck in dead-end service work or the gig economy.”

I recently explained how TikTok is in trouble because the red-hot video app, which is owned by the Chinese company ByteDance, is under scrutiny from lawmakers in the United States. At the heart of this is a big, untested argument that Chinese laws could force TikTok, in theory, to send data to the Chinese government.

In an interview with The Times, TikTok’s chief executive, Alex Zhu, tried to assuage Washington’s fears:

No, TikTok does not censor videos that displease China, he said. And no, it does not share user data with China, or even with its Beijing-based parent company.

Mr. Zhu said he’d personally reject an appeal for data even if it came from President Xi Jinping.

And it’s reportedly trying other stuff, too. The Wall Street Journal reported that TikTok executives had discussed “rebranding it in the United States” and “expanding operations in Southeast Asia, possibly Singapore — which would allow executives to distance the video-sharing app from China.”

But it’s unclear how far such assurances can go.

“There doesn’t seem to be a way to assuage regulators in the U.S. without removing that ownership issue,” Adam Segal, the director of the digital and cyberspace policy program at the Council on Foreign Relations, told me.

In the Times interview, Mr. Zhu said a sale of TikTok’s American operations hadn’t been discussed. But he didn’t rule out the possibility of ByteDance’s reorganizing it as a separate company with a new board. It might not have much choice.

Iran has demonstrated that it’s willing to take its citizens offline — and, perhaps more worryingly, that it’s able to do so without plunging domestic infrastructure into chaos.

The Iranian government recently imposed an almost complete nationwide internet blackout that lasted for almost five days. It came after protests erupted across the country after the government said it would raise gasoline prices. Amnesty International estimated that as many as 106 people were killed.

Mahsa Alimardani, a researcher at the Oxford Internet Institute, explained to me in an email that the Iranian government was trying to limit the spread of evidence of state violence.

“The deaths and the ruthless images of authorities raining bullets on protesters that are being disseminated are not the images they want dominating their narrative,” she said.

Blocking internet traffic and, by extension, social media certainly cuts information flows. But there’s little evidence that internet blackouts undermine protests. A 2018 report by Human Rights Watch found “no substantive data or evidence to prove that internet shutdowns can scale down violence.” That Iran’s blackout persisted, Ms. Alimardani said, was a strong indication that it had done little to calm the protests.

But the shutdown revealed one success for Iran’s government: its National Information Network, a domestic, highly censored digital infrastructure. That infrastructure enabled the nation’s critical services, such as finance and health care, to largely operate normally, demonstrating that the country is well equipped to shut down the public internet.

“They are proving they can and will cut people off if they question authorities again,” Ms. Alimardani said.

“Don’t be evil,” it once said. But Google’s internal mantra now looks like it could be more like: “Don’t question the management.”

It has come to light that Google has ended its biweekly all-hands meetings. The decision was made just days after Google employees protested the interrogation of two colleagues by the company’s investigations team, according to CNBC. And it all comes on the back of a staff protest last year over the company’s handling of sexual harassment complaints, vibrant discussions on internal memo boards about company policies and pushback from some workers about Google’s work in China and with the United States military.

Then, this past week, it transpired that Google had hired an anti-union consulting firm to advise its management as it deals with worker unrest.

It’s still too early to tell how this will shake out at Google. But what’s clear is that the company’s traditional embrace of transparency and flexibility for workers is straining as more employees question its motives and actions.

Some Stories You Shouldn’t Miss

How are we doing?

We’d love your feedback on this newsletter. Please email thoughts and suggestions to [email protected].

Forward it to your friends, and let them know they can sign up here.

The coronavirus pandemic has drawn new business to start-ups that provide end-of-life services, from estate planning to a final tweet. Source

The Superpowers of Super-Thin Materials

In recent years, internet-connected devices have colonized a range of new frontiers — wrists, refrigerators, doorbells, cars. But to some researchers, the spread of the “internet of things” has not gone nearly far enough. “What […]

Google, Facebook and Twitter said on Monday that they would temporarily stop processing Hong Kong government requests for user data as the companies reviewed a sweeping national security law that has chilled political expression in […]