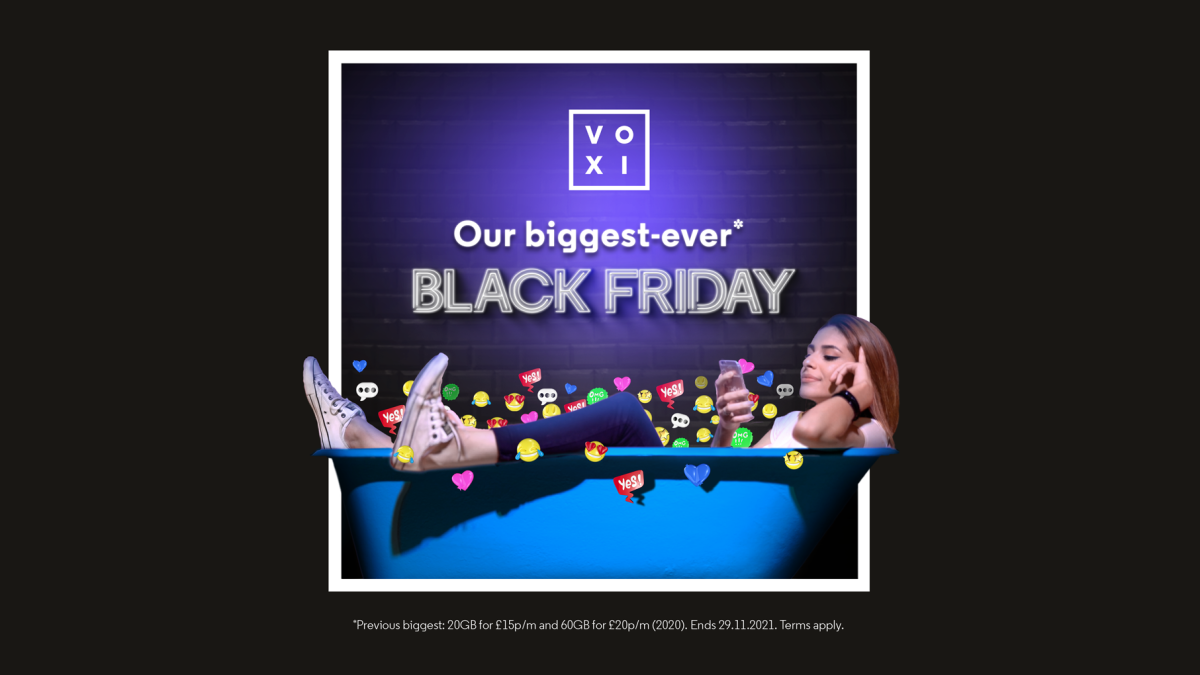 It is Black Friday season, the single best time of the year to try out new tech. If you’re keen to upgrade your phone or switch networks, we have a suggestion you may not have encountered before: VOXI.

VOXI is well-known for its great deals, no-strings-attached service and great all-round performance, and right now is a better time than ever to get involved because Black Friday has pushed VOXI’s value score up even higher.

From November 15 to November 29 you can grab one of VOXI’s exclusive Big Data offers. Its £15 a month plan now gets you 50GB of data a month, or for just £5 more you can upgrade to 100GB a month. All plans come with Endless Social media that doesn’t eat into your data.

If that doesn’t suit your needs, there is a discounted £10 plan for the money-savers, and a £30 one for the data hounds.

Finding out about VOXI is like discovering a gold nugget at your feet, because you get all the 5G performance and service benefits of the Vodafone network, matched with the near-unbeatable deals of a plucky upstart.

There’s more to VOXI than just 5G mobile internet and a tempting price, though. It’s very big on offering “endless” access, so you don’t have to worry about running out of data or minutes.

There’s more too. Unlike some rivals. VOXI does not charge extra if you use your phone when on holiday in Europe. Whether you head to Switzerland, San Merino or Croatia, you can keep your phone set to roaming mode without worrying about racking up data charges. 47 countries are included in VOXI’s free-roaming zone.  There’s just a 20GB fair use policy, which is far more than we’d need anyway.

All VOXI plans include Endless Calls and Texts. Have UK friends and relatives who still like SMS or classic phone calls outside of WhatsApp and the like? No problem, you can ring them without incurring any charges, and send as many picture messages as you like for free.

VOXI knows it offers great service at a top price, which is why it doesn’t need to use other ways to make you stay. There’s no contract at all.

You can leave the network whenever you like, with no penalty. The service will simply tail off after the month you’ve already paid for. It’s the sign of a company that operates on the strength of the services it offers.

VOXI started off with SIM-only deals. In 2018 it began selling phones matched to those plans. You can now also get refurbished “like new” handsets to make your money go even further.

They look and operate just like a brand new phone, fully tested and with no signs of use at all. It’s better for your pocket, and for the environment too. And even when you buy a phone with a plan attached, you’re still not tied to VOXI. While most handsets are initially locked to parent network Vodafone, after 30 days you can simply request an unlock code to use the phone on a different carrier.

The more you learn about VOXI, the more you’ll like it. VOXI proves switching your network doesn’t have to be a big deal, so why not see if it has something to suit your needs while the Black Friday bargains are raining down. Shop VOXI’s discounted Big Data plans, available on its website until November 29, or check out VOXI’s phone selection today.