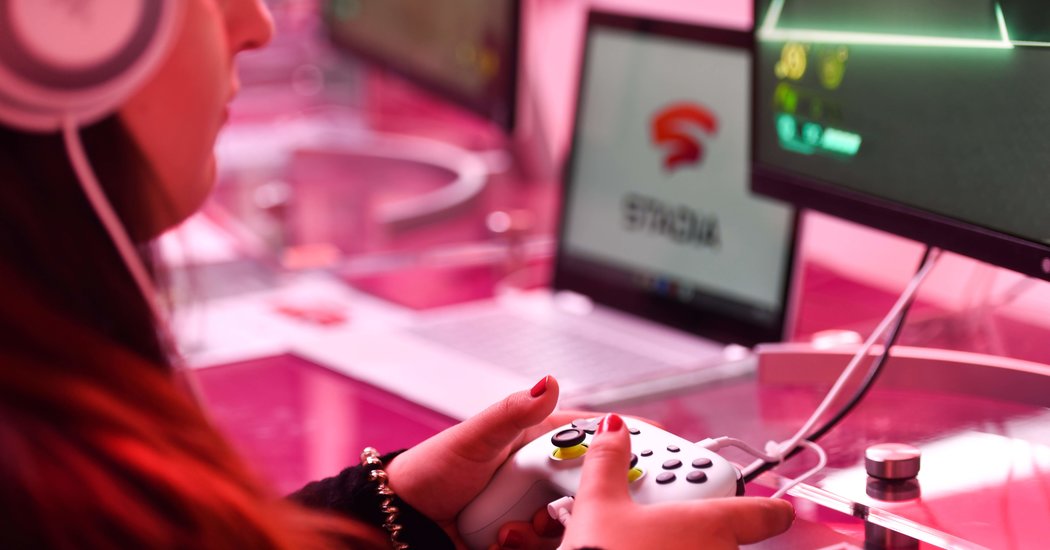 Wouldn’t it be great if video game consoles went away and we could play games on any device? After all, the games — not the machines — are what we care about.

That is Google’s ambition with Stadia, the streaming game service that the company plans to release on Tuesday.

The product is not the hardware that we see in our homes. Instead, it’s Google’s data centers, which are handling the computing power to run games and to broadcast them to our smartphones, tablets and television sets over the internet. That’s unlike a traditional console, which plays games directly from the hardware.

The result: When we play games via Stadia, we are actually watching videos of the game streaming from Google’s servers. When we press a button, that command is sent to Google’s server to control whatever is happening in the game, which we then see in the video.

Trippy, right? Given that concept, you might assume there would be occasional delays between button presses and the actions happening onscreen — and you would be correct.

In my tests playing several Stadia games last week, I was generally impressed with how smoothly the games streamed. Even titles with intense graphics ran well on my TV, on a laptop and on a cheap smartphone. But there were occasional glitches and quality issues because of inconsistent internet speeds and early bugs.

So as someone who has played video games since childhood, I wouldn’t ditch a console for this streaming service. Those who play games want motion to be flawless.

Nonetheless, Google’s concept is a fascinating glimpse into how gaming could evolve in the coming years as internet speeds increase and data centers get even more powerful. Here’s what I found.

Getting started with Stadia took about 30 minutes, much longer than a normal console. That’s because the online setup was less intuitive than the process for plug-and-play gaming systems like Microsoft’s Xbox One or Sony’s PlayStation 4.

First, I activated my Stadia account at stadia.google.com, which was linked to my Google account, and on that site I bought some games. Google provided five sample titles to try.

To get Stadia to stream games to my television set, I plugged in Google’s Chromecast, a TV streaming dongle, and set that device up with my Google account. Then, using the Stadia smartphone app, I tried to get the Stadia game controller to synchronize with the Chromecast.

This took several attempts before I ended up restarting my phone, which finally made the controller and Chromecast talk to each other.

Playing on a computer was simpler. Using Google’s Chrome web browser, I visited the Stadia website and could immediately play games using the keyboard and mouse, or by hooking up a controller via the USB port.

To get Stadia to stream games on a phone, I opened the Stadia app on a Google Pixel device and plugged the controller directly into the phone’s USB port.

Fun on big screens, not so much on phones

I spent most of my time playing the shooter game Destiny 2 and the fighting game Mortal Kombat 11 since they were the most graphically intense. I enjoyed playing the games on my TV screen and on a laptop, but not a phone.

Stadia struggled the most with Mortal Kombat 11. In some fights, motion stuttered and the graphics appeared more pixelated at times, like when my character stuck a giant sword through his opponent’s stomach and sawed away at his innards.

Google said this could be because my internet speeds dipped.

I tinkered with the settings to see if I could make the motion smoother. In the Stadia app, there is a button labeled “data usage and performance,” where you can change the video quality from “best” to “balanced” or limited.” In a nutshell, the three modes will stream games at different resolutions depending on your internet speeds. After I chose the “balanced” settings, Mortal Kombat 11 ran more smoothly and the graphics still looked great.

Among the games, I enjoyed Destiny 2 the most. (I admit that years ago, I lost many hours of my life playing the original Destiny game on the PlayStation 4.)

With incredibly detailed graphics, this online role-playing shooter title is a game that pushes computing power to its limits. So I was delighted to see Stadia running it adequately in my MacBook Air’s web browser and even on Google’s Pixel 3A, its budget smartphone.

Smartphone gaming was where Stadia fell short. Stadia requires you to plug the game controller into the phone’s USB port to control the game; the games do not adapt to a smartphone to take advantage of its touch-screen controls.

This mobile gaming setup doesn’t make sense. I spent half an hour on my couch, hunched over and staring at a tiny screen while mashing buttons to blast aliens in Destiny 2 before my back started hurting. I moved to a desk and used a stand to prop up the phone and play sitting in a chair, but this still felt uncomfortable.

I also ran into some glitches. Occasionally when I used the Stadia game controller to move left or right while playing Destiny 2 on my TV, the game continued moving in either direction even when I was no longer pressing the controller.

For hard-core or competitive gamers, this type of glitch would be unacceptable. For me, a self-described casual gamer, it was just annoying. Google asked me to reset the controller to factory settings, which required repeating the setup process. Somehow, this fixed the problem, but I’m concerned that others might have this problem when Stadia is released.

There are still plenty of unknowns with Stadia. So I recommend taking a wait-and-see approach before buying games there. Here are the biggest uncertainties:

Sales are falling fast at Huawei, the Chinese tech titan that American officials have deemed a national security threat and sought doggedly to undermine. The company said on Friday that its shrinking smartphone business caused […]

OAKLAND, Calif. — Twitter added a warning to a post from President Trump about a racist baby on Thursday, saying it contained manipulated media designed to mislead people. Mr. Trump’s tweet, which he posted earlier […]

In the tech industry, 2021 was a year of profits and pivots. Thanks in part to the pandemic and the digitization of our lives, all of the big tech companies got bigger. Facebook changed its […]