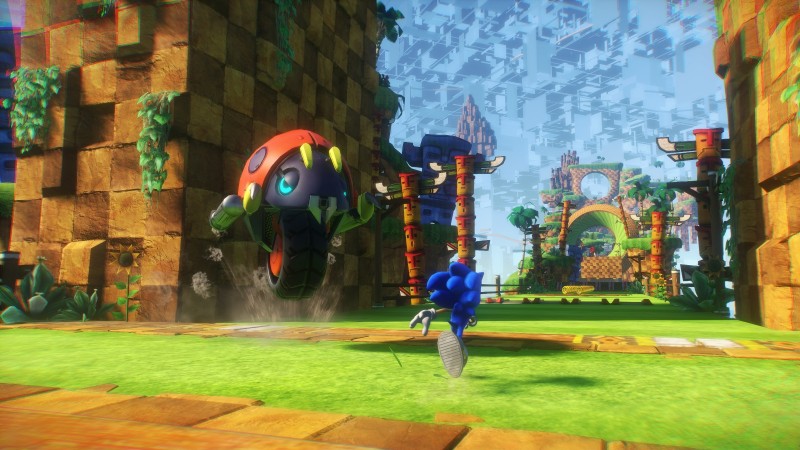 Sonic Frontiers’ “open zone” format has been the centerpiece of discussion, and for a good reason. Dropping Sonic in an open-world style environment gives fans a new, bigger arena to roam around and go fast in. However, traditionalists may be happy to learn that Frontiers includes standard, linear platforming stages hidden in unlockable areas called Cyber Space. I got to play one of these stages during my demo during Summer Game Fest Play Days a couple of weeks ago to get a handle on how these self-contained levels compliment Frontiers’ exploration-heavy gameplay.

As seen during today’s Nintendo Direct Mini, while exploring the open world (which you can read about in my previous preview), I collected special items called Portal Gears. You can obtain these gears by solving puzzles and completing other types of challenges throughout Starfall Islands. Presenting them at stone landmarks resembling a throne establishes a connection to the Cyber Space, a digital dimension Sega describes as a “game within a game.” Cyber Space treats players to fast-paced platforming stages fans of 3D Sonic games will be intimately familiar with, providing a more focused diversion to open zone wandering.

The futuristic stage I visited featured the same platforming trappings fans would come to expert. As I sprinted down the linear lane, I hopped on bounce pads, used my homing attack to ricochet off objects, and surfed rails until I reached the finish line. Completing a Cyber Space level rewards Vault Keys used to unlock new areas throughout Starfall Islands. This particular Cyber Space stage didn’t offer anything 3D Sonic veterans haven’t seen before. Still, Frontiers’ improved controls meant that it at least played a bit better than the Hedgehog’s recent outings. If nothing else, Cyber Space gives fans pockets of familiarity while providing another diversion in Frontiers’ world, which may assuage some fans’ concern about the game’s perceived lack of activities.

Sonic Frontiers launches for PlayStation 5, Xbox Series X/S, PlayStation 4, Xbox One, Switch, and PC this fall. Sonic’s next big outing is also our cover story for the month of July. Click the banner below to keep up with a month’s worth of exclusive interviews, videos, and features as they begin rolling out in the coming weeks.